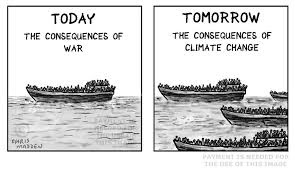 “No one can deny the terrible similarities between those running from the threat of guns and those fleeing creeping desertification, water shortages, floods and hurricanes,” said Prof. Dr. Konrad Osterwalder, the former rector of United Nations University, a global think tank and postgraduate teaching organisation headquartered in Japan.

There is an overwhelming consensus among experts, scientific community and international specialised organisations that Africa is the most impacted region by them. Only second to Asia, both extension and population wise, Africa is on the one hand home to nearly half of some 40 on-going armed conflicts. On the other, this continent made of 54 states and 1.2 billion inhabitants, is the most hit region by all sorts of consequences of growing climate change.

1. Droughts combined with population growth, a lack of sustainable land and water management, natural disasters, political conflicts and tensions and other factors have resulted in massive population movements across Africa, the United Nations Environment Programme (UNEP) reports. Displacement in Africa is the result of a multitude of causes including struggles for political power, communal violence, disputes over land, floods, storms and other such natural hazards, it adds. More than half of the world’s fragile states are in sub-Saharan Africa, and some of these states have the largest numbers of internally displaced persons (IDPs). “Africa has more countries affected by displacement than any other continent or region, and was home to more than 15 million internally displaced persons in 2015.”
In short, “the relationship between displacement and the environment is well established in Africa. People leave places with slow-onset environmental degradation, such as drought and desertification and continue to flee rapid on-set environmental emergencies such as tropical storms and flash floods,” says Saidou Hamani, Regional Coordinator for Disasters and Conflict sub-programme, UNEP Regional Office for Africa.

2.  According to the 2016 Global Report on Internal Displacement, there were 27.8 million new displacements in 127 countries during 2015, roughly the equivalent of the populations of New York City, London, Paris and Cairo combined; of the total, 8.6 million were associated with conflicts and violence in 28 countries, while 19.2 million were associated with disasters in 113 countries.
The growing intensity of meteorological disasters due to climate change, coupled with the effects of environmental degradation is likely to continue being a factor behind human displacement.

— The International Organization of Migration (IOM) predicts there will be 200 million environmentally-displaced people by the year 2050 with major effects on countries of origin, transit countries, as well as receiving countries.

Individuals and communities displaced by disasters and climate change and those displaced by conflicts often experience similar trauma and deprivation. They may have protection needs and vulnerabilities comparable to those whose displacement is provoked by armed violence or human rights abuses. “Climate change is expected to further exacerbate the stress that fragile states are already facing.”
n Africa, environmental degradation and food insecurity are related to floods and other factors such as diminishing pasture for cattle as well as water, firewood and other natural resource scarcities, says IOM. Such factors contribute to displacement, resulting in increasing competition for scarce resources, which also contributes to armed conflict, particularly between pastoralists and sedentary communities.
This is especially pronounced in the Sahel (Lake Chad Basin), Sudan, South Sudan, Djibouti, Somalia, Ethiopia and Kenya, all of which have large pastoralist populations who migrate according to seasonal patterns and climatic variations.
Future forecasts vary from 25 million to 1 billion environmental migrants by 2050, moving either within their countries or across borders, on a permanent or temporary basis, with 200 million being the most widely cited estimate. This figure equals the current estimate of international migrants worldwide.

3. “Changes in the regional climate are impacting issues linked to the availability of natural resources essential to livelihoods in the region, as well as food insecurity. Along with important social, economic and political factors, this can lead to migration, conflict or a combination of the two,” according to Livelihood Security Climate Change, Migration and Conflict in the Sahel.

4. It is evident that gradual and sudden environmental changes are already resulting in substantial population movements, the UN Refugee agency (UNHCR) reports.
“The number of storms, droughts and floods has increased threefold over the last 30 years with devastating effects on vulnerable communities, particularly in the developing world.”
“Climate change and the environment have a big impact on the lives of millions of forcibly uprooted people around the world.”
Many of them rely on the environment for survival, particularly during emergencies – for food, shelter, energy, fire and warmth, medicine, agriculture, income-generation activities and more, adds UNHCR.
Unsustainable use of natural resources can lead to environmental degradation, with lasting impacts on natural resources and on the well-being of the displaced and host communities. Additionally, competition over scarce natural resources, such as firewood, water and grazing land, can lead to friction.”

5. Gradual changes in the environment tend to have an even greater impact on the movement of people than extreme events. For instance, over the last thirty years, twice as many people have been affected by droughts as by storms (1.6 billion compared with approx. 718m),according to the International Disaster Database.
In 2008, 20 million persons have been displaced by extreme weather events, compared to 4.6 million internally displaced by conflict and violence over the same period.

6.  Disasters and climate change are a growing concern. Since 2009, an estimated one person every second has been displaced by a disaster, with an average of 22.5 million people displaced by climate or weather-related events since 2008, according to the International Displacement Monitoring Centre www.internal-displacement.org report. (IDMC 2015).

7.  The Intergovernmental Panel on Climate Change, the UN’s science advisory board, projects an increase in the number of displaced over the course of this century. The majority of the people of concern to UNHCR are concentrated in the most vulnerable areas around the world.

Climate change will force people into increasing poverty and displacement, exacerbating the factors that lead to conflict, rendering both the humanitarian needs and responses in such situations even more complex.


Two-thirds of the African continent is already desert or dry-lands. But while this vast extension of the second largest continent on Earth after Asia is “vital” for agriculture and food production, nearly three-fourths of it is estimated to be degraded to varying degrees.

This shocking diagnosis illustrating the current situation of this continent of over 30 million km², home to 1.2 billion human beings living in 54 countries, comes from the top world body dealing with desertification.

In fact, in its report “Addressing desertification, land degradation and drought in Africa”, the Bonn-based UN Convention to Combat Desertification (UNCCD) explains that the continent is affected by frequent and severe droughts, which have been particularly severe in recent years in the Horn of Africa and the Sahel. “Poverty and difficult socio-economic conditions are widespread, and as a result many people are dependent on natural resources for their livelihoods,” it says.

On this, another UN agency has once more warned, “With only a few weeks before land preparation begins for the next main cropping season, some 23 million people in Southern Africa urgently need support to produce enough food to feed themselves and thus avoid being dependent on humanitarian assistance until mid 2018.”

The Rome-based UN Food and Agriculture Organisation (FAO) on 28 July alerted against what it called “race against time in drought-ravaged Southern Africa to ensure 23 million people receive farming support.” As little as just 109 million dollars are urgently required for the provision of seeds and other agricultural inputs and services.

Posted by ajohnstone at 3:13 AM