Poisoning the air for profits 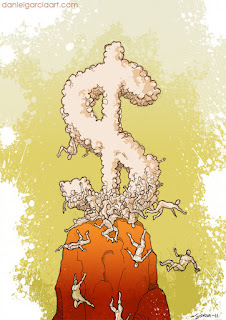 Major European oil companies and commodity traders are exploiting weak fuel standards in African countries to export highly polluting fuels that they could never sell at the pumps in Europe. When the fuel is burned, the sulphur is released into the atmosphere as sulphur dioxide and other compounds that are major contributors to respiratory diseases such as bronchitis and asthma. Vehicle emissions are a significant contributor to air pollution, which is why in Europe the maximum sulphur content of diesel has been set at 10 parts per million (ppm) since 2009. In parts of Africa, the legal limit on sulphur in diesel is 5,000 ppm.

The high-sulphur fuels also have a knock-on effect, rapidly destroying emission-reducing technologies in vehicles, according to Rob de Jong, the head of the UNEP transport programme. “So if you buy a vehicle that’s a couple of years old and import it into some of the African countries, the technology in there – sensors and filters – all gets spoilt, and these cars, which are potentially very clean, are destroyed in a couple of tanks, and for the next 20 years will be belching smoke,” he said. “It’s important to understand the tragedy of this,” he added. This in turn increases emissions of fine particulate matter, which can lodge deep in the lungs, causing cancers and other health problems.

Air pollution is estimated to have killed more than 17,500 people in Ghana alone in 2013, costing more than $542m in lost labour income, an estimate that doesn’t even include the cost of treating pollution-related disease.

De Jong said suppliers deliberately blended products towards the high end of the nationally imposed sulphur limit to increase their profits. “There’s not much market anymore for high-sulphur fuels. These are really specific batches made for those specific countries.

The companies involved all deny any wrongdoing and say they comply with the law in the countries in which they operate. Public Eye, however, says the result is “regulatory arbitrage” that allows traders and fuel companies to dump cheap, dirty fuels by blending them into other diesel before export, maximising profits at the expense of Africans’ health.

Trafigura made headlines when a ship it had chartered dumped toxic waste in the Ivory Coast a decade ago, and the company’s lawyers attempted to gag the press from reporting on a draft report into the incident. Vitol’s sales last year topped $270bn. Its chief executive, Ian Taylor, is a major Conservative donor.

Posted by ajohnstone at 9:39 AM