The decliner’s proportion of the world’s population is projected to fall from close to 30 percent today to nearly 20 percent by the year 2050. The country with the most rapid decline among the decliners is Bulgaria (27 percent), followed by Romania (22 percent), Ukraine (21 percent) and Moldova (20 percent). China, is expected to decrease by more than 2 percent by 2050, with the Chinese population peaking in less than a decade. Other large populations projected to experience demographic declines by midcentury are Japan (15 percent), Russia (10 percent), Germany (8 percent) and Italy (5 percent). Moreover, some of the decliners have already experienced population decline for a number of years in the recent past, including Bulgaria, Hungary, Japan, Latvia, Lithuania, Romania, Russia, Serbia and Ukraine. The population projections for the decliners assume some immigration in the future. For some decliner countries, such as Italy, Japan, Germany, Hungary, Spain and Russia, immigration lessens the expected declines in their future populations. For example, while Italy’s population with assumed immigration is projected to decline by 5 percent by mid-century, without immigration Italy’s projected population would fall to 13 percent.

The doublers are nearly all located in sub-Saharan Africa. The largest countries among the doublers are Nigeria (187 million), followed by the Democratic Republic of the Congo (80 million) and Tanzania (55 million). The largest doubler population, Nigeria, is expected to increase by 112 percent, reaching just under 400 million by 2050 and thereby displacing the United States as the world’s third largest country after India and China. The Democratic Republic of the Congo whose population of 80 million is projected to increase by 145 percent, or an additional 116 million people, bringing its total midcentury population to nearly 200 million.

Today the doublers together account for 10 percent of the world’s population.
By 2050, however, due to the doublers’ rapid rates of demographic growth that proportion is expected to increase to 18 percent of the world’s projected population of nearly 10 billion people.
Among the doublers the country with the most rapid increase is Niger, whose population of 21 million is expected to double by the year 2034 and to experience a 250 percent increase by mid-century, more than tripling its population to 72 million. Other countries with substantial increases of 150 percent or more are Zambia, Angola, Uganda and Mali.

Doublers are generally migrant-sending countries, while many of the decliners are migrant-receiving countries. Given the onerous living conditions for most of the populations in doubler countries, growing numbers of young adults are turning to both legal and illegal migration to wealthier developed countries, many of which are also decliner countries. Few of the decliners are prepared to accept large-scale immigration, particularly from doubler countries, to address labor force shortages and population aging concerns. As is being increasingly reported, some decliners are erecting barriers, fences and walls to deter unauthorized immigration, while others remain resolutely averse to a sizeable foreign population taking hold within their borders. However, as has been repeatedly demonstrated throughout world demographic history, rapidly growing populations are not easily confined to within borders, eventually traversing deserts, mountains, rivers and seas and spreading out across continents.

The median fertility rate among the 29 doubler countries is 5.3 births per woman, ranging from a low of 4.4 in Kenya to a high of 7.6 in Niger. In contrast, fertility levels among the 38 decliner countries all fall below the replacement level of about two children, with the median fertility rate being 1.5 births per woman. Countries that are approximately a half child below the replacement level include China, Germany, Hungary, Italy, Japan, Poland, Russia and Spain. Many of the decliners have already passed through the historic reversal, or the demographic point where the number of elderly aged 65 and older exceeds the number of children below age 15 years. The median ages for half of the decliners are above 40 years, with the oldest being Japan, Germany and Italy at 46 years. With the proportion of elderly increasing and more of them living longer, often many years beyond retirement, governments of the decliner countries are particularly concerned about escalating costs for social security, pensions, health and care giving. Options to address those fiscal issues include raising official retirement ages, increasing taxes, redirecting government revenues and reducing benefits. Many decliner countries, including China, Germany, Italy, Japan, Russia and Spain, are attempting to alter their projected demographic futures by raising their low fertility levels in hopes of mitigating population decline and perhaps even achieving near population stabilization. Moving to replacement level fertility by encouraging women to have additional children, however, has proved to be difficult and generally not successful.

Doublers face serious development challenges in meeting the basic needs of their rapidly growing and very young populations. The median ages of the doubler countries are all below 20 years, with the youngest being Niger (15 years), Uganda (16), Chad (16), Angola (16), Mali (16) and Somali (16). Many doubler countries, such as Angola, Democratic Republic of Congo, Mali, Niger and Uganda, are now facing food shortages. Providing sufficient foods for their rapidly growing populations is expected to be considerably more difficult in the years ahead. 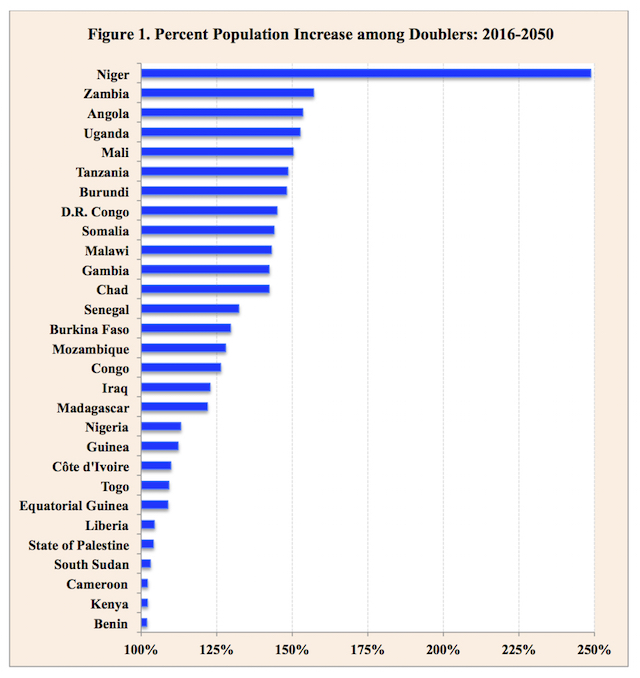 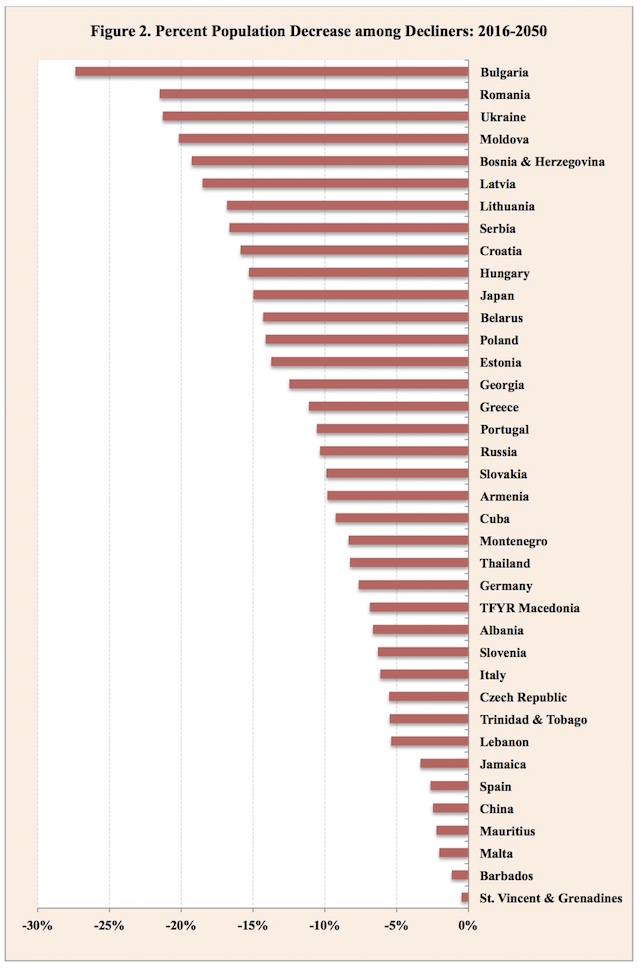 Posted by ajohnstone at 3:24 AM