Africa is responsible for just 3.5 percent of fossil fuel emissions – despite being home to around 16 percent of the global population. Africa’s energy infrastructure is far less developed than in the carbon-heavy economies of America, Europe and China, for example. According to the International Energy Agency (IEA), around 600 million people in Africa do not have access to electricity.

Zambia, and Democratic Republic of Congo have close to 100 percent renewable electricity production from hydropower facilities. Ethiopia, too relies heavily on hydropower but also wind power, which now accounts for about 4 percent of its power generation. Morocco and South Africa are among the African countries investing most in modern wind and solar power facilities. But South Africa still generates less that 3 percent of its electricity from renewables.

Africa is still heavily dependant on burning wood and charcoal for cooking and heating. According to the IEA, approximately 730 million people in Africa rely on traditional biomass. And that has its own environmental impacts, in terms of deforestation and air quality. 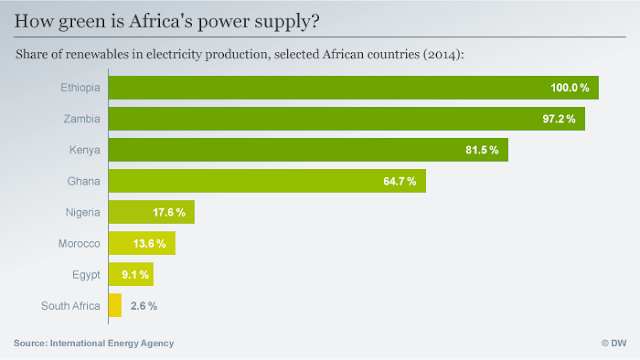 Posted by ajohnstone at 6:25 AM