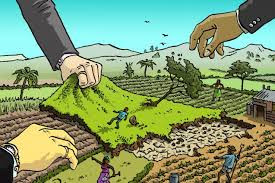 On October 12, the government of Mozambique quietly announced that it would close its Agriculture Promotion Centre (CEPAGRI), the agency created in 2006 to promote large-scale foreign investment in the country’s agricultural sector. Mozambique analyst Joseph Hanlon reported in his Mozambique News Report that CEPAGRI was finished because those large-scale projects it was supposed to broker: “none of them have succeeded.” The Mozambican government may have closed its agricultural promotion center, but it remains committed to giving away good land to foreigners. Large-scale projects have been more successful in forestry and tourism, with nearly two million hectares in concluded deals. And mining concessions continue to displace or threaten thousands of Mozambicans as the mineral boom continues.

Mozambique’s visions of foreign capital modernizing its agricultural sector have indeed proven grandiose. Nowhere is this clearer than in the rich Nacala Corridor in northern Mozambique, where the ProSavana project promoted by Brazil, Japan, and Mozambique was going to transform 35 million hectares—nearly 100 million acres—into soybean plantations modeled on Brazil’s cerrado region. Brazilian agribusinessmen walked away, seeing land that was hardly “unoccupied,” resistance from the communities occupying that land.

But is land-grabbing over, in Mozambique and across Africa and the rest of the developing world? Now that crop and food prices have returned to lower levels, is the pressure off from foreign buyers looking to acquire large tracts of agricultural lands?

Not according to new data from the Land Matrix Initiative, which has been tracking such deals since the land rush took off in 2007. A large number of formerly announced deals have failed to materialize but many that remain are now under contract and coming into production.
http://landmatrix.org/en/announcements/2016/10/04/analytical-report-land-matrix/
More than 1,000 large-scale foreign land deals are now under contract for agriculture covering more than 26 million hectares of land, according to the new report, "Land Matrix Analytical Report II: International Land Deals for Agriculture.” That area represents a remarkable two percent of arable land in the world. Nearly three-quarters of the projects have now begun production on some of the land.

Africa remains the largest target for land grabs, accounting for 42 percent of global deals with 10 million hectares under contract. Mozambique now ranks 18th among all target countries in area under contract, with 500,000 hectares in 60 concluded deals. That puts the country, which in the 2012 report was a top target in Africa, well behind Ethiopia, Ghana, and South Sudan, which have the most on the continent. The United States and United Kingdom remain among the leading investors in the amount of land under contract for agriculture. China ranks ninth overall, with about one million hectares under contract, barely one-third the land acquired by U.S. investors. China remains a minor agricultural player in Africa.

The new report also dispels the myth that the land grabs are mainly by “resource poor” governments to secure food access for their domestic populations. At least 70 percent of the concluded deals are by private investors, with only 6 percent directly by governments. And food crops account for a minority of the land under cultivation. Cereal crops account for only an estimated 20 percent of the area under cultivation, while 44 percent is estimated to be in oilseeds such as palm oil and another 10 percent is in sugar. The latter two are considered prime “flex-crops” because they can be used to produce biofuels, raw materials for processed foods, or edible oils and sugar.

The new data also shows that the acquired land was not “unused,” despite investor claims to the contrary. Fully 58 percent was reported to be cropland in recent use. Only 10 percent of acquired land was considered “marginal,” and Land Matrix points out that this by no means indicates that it was not in use. “Land considered to be ‘marginal’ often serves as a grazing area and is important to rural communities and indigenous peoples,” notes the report. Land Matrix also confirmed that successful projects failed to generate many jobs, as capital-intensive farming displaced labor-intensive small-scale production. One researcher estimated a net loss in livelihoods between 28 percent (Tanzania) and 75 percent (Kenya) from large-scale foreign projects.

A 200,000-hectare project along the Lurio River in northern Mozambique is still very much in the pipeline, even if it doesn’t appear yet in the Land Matrix database. (GRAIN, the other international organization collecting land grab data, shows it as an announced project that could displace 100,000 people.) But the failures are stunning, and a testament to communities’ resistance to the foreign invaders, as well as their insistence that the government respect the country’s progressive Land Law. In the Land Matrix’s first report in 2012, Mozambique was the second most important target in the world, with nearly 8 million hectares in reported agricultural deals. Now, the Land Matrix lists only 500,000 hectares in 65 concluded agricultural deals. Of the current projects, nine, on nearly 100,000 hectares, are listed as “abandoned,” mostly biofuel projects. Data is scarcer on the area actually under production, but Land Matrix could confirm only 21,000 hectares in production. No doubt, the area is larger than that. Interestingly, the largest operational project, a Chinese rice investment in Xai Xai, has been significantly scaled back from its listed 8,800-hectare plantation because of community resistance.

But the initial alarming ProSAVANA promise was 35 million hectares. ProSAVANA appears in the Land Matrix database now as a 700,000-hectare project “intended (under negotiation),” but with no land under contract or production seven years after the plan was announced. The project is now limping through yet another consultation process with little pretense of attracting investors. Brazil does not appear as the home source of investment for a single Mozambican farming project, though there certainly are a few. Interestingly, Brazil ranks fifth in the world as a land-grab target, with two million hectares under contract to foreigners.

Land Matrix’S 2012 report showed 83 million hectares in “intended” agricultural deals, with some 56 million in Africa. According to the new report, only 26 million hectares in deals have been concluded globally—less than one-third the threatened amount—with about 10 million in Africa, less than one-fifth the area reported in 2012. Resistance is a big part of the reason, and it will continue to determine where investors can impose their will. The difference between a land grab and a large-scale project is consultation and consent. An international campaign for Land Rights Now is focusing particular attention on women, indigenous communities, and others who do not have secure title to the land and are particularly vulnerable. Fundamentally, the responsibility lies with national governments to recognize communal and individual land rights and stop giving away land to foreign investors.

Posted by ajohnstone at 4:45 AM