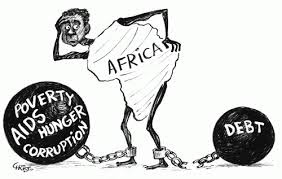 Protests across the world demand aid to African governments burdened with financial debt. African statesmen beg relief from the crushing debt their countries owe to western powers. Their developing and competing states have seen poverty, continual wars, miserable health conditions—much of it the result of three centuries of western capitalist powers carving out their spheres of influence through colonization and unabated economic exploitation. The legacy is a cycle of developing and small capitalist states’ economic dependence on the more rapacious and developed capitalist states.

Celebrities have joined the chorus of those advocating billions of dollars of financial aid. Others, like U2’s rock star Bono, demand that western governments, banks, and capitalists forgive the debt of the African states. Both reason that this will free up needed monies for pressing social problems: poverty, rampant health problems, and building needed economic infrastructure.
Their hearts are in the right place, but what they propose as the solutions, or at least the beginnings of solutions—to provide Africa with needed breathing space to “catch up” to western capitalist states—falls short of their goal despite Africa’s problems being real enough.

One recent report suggests nearly 600 million people will be living in extreme poverty in sub-Saharan Africa by the year 2016. Such forecasts mirror poverty worldwide. Presently under global capitalism half the world’s population live on less than $2 a day, a fifth surviving on half of that. Some 30 000 children die each day because of poverty.

Sweatshops and the misery of child labour, such as in India’s silk manufacturing industry where children as young as ten years old work seven days a week for a pittance, are the conditions of work for many. Meanwhile, multinational corporations reap the profits from their labour so altering the relationship between labour and capital is one thing they’d prefer not to do.

Yet, while this sanctioned misery for Africa’s labouring poor carries on, hired ideologists and apologists beating the drum of free enterprise suggest that what Africa really needs is not more aid but a good dose of free market capitalism. These economic spin doctors weave fractured fairy tales of capitalism’s glories where commodities, demand and supply, and money reign supreme. To them Africa’s economic woes can only be overcome by the free reign of “the market,” and if that means the further tightening of belts amongst the working class then so be it.
They tell us that there is no other alternative. In their view, capitalism is the best of all possible
systems—which is not surprising, because it’s ‘their system’ and they draw their parasitical existence from it.

The so-called “radical” solutions of forgiving state debt or massive foreign aid do nothing to solve the root of the problem—capitalism itself—a system based upon exploitation, where commodities must be sold with a view to profit. Simply, it is the way the system functions. It is not, and never can be, a system that deals with people as human beings, to provide them with the things they need. Those who try to put a human face on it ultimately deceive themselves because reforms do not remove the system that engenders poverty—it postpones it.

The continent of Africa is rich in resources and in the human ability and intelligence to meet their own needs. Contrary to kow-towing to the capitalist game, the solution can only be a fundamentally different kind of society where production is solely for use, without profits or wages, where all people of the world democratically determine their future for themselves. This is the basis of what we in the World Socialist Movement stand for—Real Socialism—Real Democracy.

Those who have been dubbed as part of the “anti-globalist” movementmay argue that change is needed now. Socialists agree. What we advocate is a real change now, not a tinkering with the capitalist system. The movement toward a better, sane world fit for human beings would be a much more strategic use of our energies if devoted for that very fundamental change— Socialism, Now.

Len Wallace, Socialist Party of Canada, 2002
Posted by ajohnstone at 8:53 AM