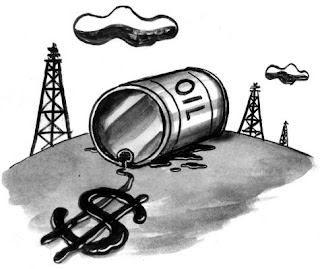 Nigeria is home to Africa's largest petroleum industry, with crude oil making up a significant portion of the country's exports. But many residents in the Niger Delta region say that they have not benefited from the oil industry. Instead, oil spills have become an alarmingly common event, devastating swathes of forest and waterways.

Researchers from a Swiss university have found that neonatal mortality rises if a child's mother lives close to an oil spill before conception. The findings are worrying for residents of the oil-rich Niger Delta.


"I grew up drinking water from a well in my grandfather's house. We just used to take a clean bucket, lift water up and drink it," Annkio  Briggs, now an environmental campaigner, told DW. "Nowadays the water is polluted. I cannot drink it anymore, although it is a natural source meant for me and my people," the 65-year-old said. She has since resorted to buying bottled water.
Persistent spills in Nigeria's oil-producing region have not just contaminated water resources. Residents are also exposed to harmful chemicals found in crude oil through direct skin contact or the consumption of polluted vegetables. Many also inhale the smoke released by burning oil. "Black spots recently covered the entire city and beyond," Delta resident Kie Oboe told DW. "This is a very serious issue, because it is affecting our health and the environment."
Research has already shown how harmful the petroleum industry can be for residents. But a new study by the University of Sankt Gallen in Switzerland has revealed that the chemicals can also be dangerous for unborn children in the Delta region if their mothers live too close to an oil spill before the pregnancy begins.
"Oil spills that occur within 10 kilometers [of the mother] prior to child conception strongly increase the risk of mortality during the first months of life," the study's author Roland Hodler explained.
According to the report, "The Effect of Oil Spills on Infant Mortality: Evidence from Nigeria," oil spills that occur within this 10 kilometer radius increase the neonatal mortality rate by 38 deaths per 100,000 live births. That corresponds to an increase of 100 percent on the sample mean. In contrast, spills that occur during pregnancy do not have an impact on infant or neonatal mortality, the study says. Holder and his colleague Anna Bruederle analyzed data from the Nigerian Oil Spill Monitor, which provides information on neonatal and infant mortality. He compared the data to the Nigeria Demographic and Health Survey, which provides the birth histories of more than 23,000 Nigerian mothers, as well as relevant health information about their children.
"Oil spills also increase infant mortality after the first months of life and continue to have negative effects on the health of surviving children," Hodler said. The study also claims that children who survive the neonatal period still have a high chance of suffering health problems during their first year of life, including a low weight-to-height ratio.
Hodler and his colleagues based these findings on 2,744 mothers living in oil spill-affected areas.
The Nigerian Oil Spill Monitor recorded some 5,296 oil spills between January 2005 and July 2014. It reports that up to 75 percent of the spills are caused by sabotage or theft. Militants and oil thieves have repeatedly attacked pipelines. Maintenance issues account for approximately 15 percent of all oil spills. Environmental campaigners have long accused companies in the area of neglecting to maintain pipes and other important installations properly. No causes have been listed for the remaining 10 percent of spills.
In 2015, Anglo-Dutch oil giant Shell agreed to pay 61 million euros ($71.89 million) in compensation to 15,600 fishermen and farmers after a Shell-owned pipeline burst twice in 2008 and destroyed thousands of hectares of mangroves, effectively bringing the region's once prosperous fishing industry to a halt. The out-of-court settlement was the culmination of a three-year legal battle in Britain. The company also agreed to begin the cleanup of two major spills; however, local civil-society campaigners claim that progress so far has been too slow.

Posted by ajohnstone at 3:24 AM