A permanent feature of capitalism, are the proxy wars being waged over the planet, fueled by religious extremism and the fall-out of military misadventures by the raw material raiding,  of the dominant capitalist players.

This is not featuring as a major event on the main news stories on western media. It was buried in a corner on the BBC, the day it happened.

A massive bomb attack in a busy area of the Somali capital Mogadishu has killed at least 85 people, officials say. 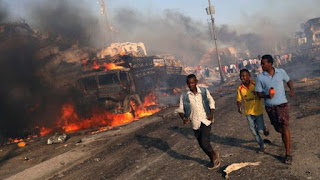 Dozens more were wounded when a lorry packed with explosives detonated near the entrance of a hotel on Saturday.

It is one of the deadliest attacks in Somalia since the Islamist al-Shabab group launched its insurgency in 2007.

It is not clear who staged the attacks. Mogadishu is a regular target for al-Shabab, which is battling the government.

276 people killed and hundreds seriously injured is the latest figure.