The cup of plenty ? 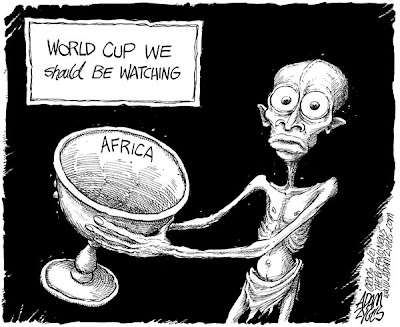 South Africa’s budget for hosting the 2010 World Cup this week hit an estimated $3.7 billion. The cost has risen more than twelve-fold from an original estimate of $295 million.

Is the continent’s first hosting of the world’s biggest single-sport event worth the money?

How many hospitals, clinics and schools have been built or improved, in a country where more than four million people live on less than a dollar a day? Will the expense eradicate crime, reduce joblessness, reduce the impact of HIV/AIDS, feed the hungry ?

The legacy of the World Cup is of questionable value, as the country already has good football facilities. A new stadium in Cape Town was built, against the wishes of residents, on a golf course, in a city where there are already two perfectly good stadiums.Other venues are being expanded, at huge cost, but will probably never be filled to capacity after the conclusion of the World Cup.
Posted by ajohnstone at 3:24 AM

you have a whole lot of reading to do before you even begin to understand RSA. perhaps you just need to understand the country better.

from your statements you seem to know a whole lot about nothing blindly ignoring that 97% of spending over the next 3 years is on infrastructure to which no value can be attached.

There is no doubt that capitalism will benefit from the new infrastructure with extensions to the air terminals in Johannesburg and Cape Town under construction, as are new passenger trains and terminals between Johannesburg and other major cities hosting the matches. And there will be more than likely a boom in tourism for South Africa for a short period before, during and after the World Cup.

But just how sustainable are all those sporting events benefits for the poor . Very limited , indeed . You can cling to your optimism but history demonstrrates that world cups , olympics and such like offer little long term hope for the working class .