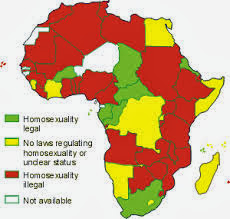 Uganda's parliament has adopted an anti-homosexuality bill that will see repeat offenders jailed for life. Barack Obama describing it as "odious" and Nobel Peace laureate Desmond Tutu comparing it to apartheid. The European Union's diplomatic chief, Catherine Ashton, said the bill violated international human-rights charters to which Uganda was party. Leslie Lefkow of Human Rights Watch said the law was "abhorrent", and Amnesty International said the "wildly discriminatory legislation" was "a grave assault on human rights".

"Now anybody found practising, recruiting for or publicising homosexuality commits a felony," said Minister of State for Ethics and Integrity Simon Lokodo. An early version of the bill would have introduced the death sentence for anyone caught engaging in homosexual acts for a second time but that clause was dropped. While homosexuality was already illegal, the new bill increases penalties and also criminalises the public promotion of homosexuality -- including discussions by rights groups.

In 2011, prominent Ugandan gay rights activist David Kato was bludgeoned to death at his home after a newspaper splashed photos, names and addresses of gays in Uganda on its front page along with a yellow banner reading "Hang Them". The former head of Uganda’s national football team has reportedly been arrested for breaking the country’s laws against same-sex sexual activity with one of his team players in 2012. A British man, Bernard Randall, is currently facing trial in Uganda and a possible two-year sentence if convicted for "trafficking obscene publications" after police found pictures of him having gay sex.

The vote came a day after the Ugandan parliament passed a dress-code law banning anything deemed sexually suggestive. The anti-pornography bill will ban scantily dressed performers from Ugandan television and closely monitor what individuals watch on the Internet.

Posted by ajohnstone at 5:48 AM