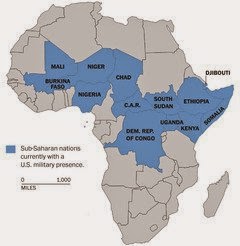 The US should prepare for operations in at least four West African countries as part of a “huge international and multinational” response aimed at forces affiliated with Boko Haram, Rodriguez said. AFRICOM is already preparing an “across the board response to the threat,” Rodriguez said. Rodriguez called on the Nigerian government to “let us help more and more.”

US Secretary of State John Kerry during his visit to Nigera said that the US is ready to “do more” militarily in Nigeria.  Chairman of the House Foreign Affairs Committee Ed Royce is scheduled to meet with the Nigerian ambassador to the US, Ade Adefuye, known to be a strong advocate of US military intervention in Nigeria, according to Nigeria’s the Guardian. Representatives Patrick Meehan and Peter King demanded that the US implement “a comprehensive strategy to address Boko Haram’s growing lethality” in letters to Secretary Kerry posted in mid-January. The Obama administration is also preparing to approve the sale of Cobra jet fighters to Nigerian government, according to the Guardian.

At a the US Army West Point academy last week, US Special Operations Command (SOCOM) chief General Joseph Votel said that US commando teams must prepare for new deployments against Boko Haram and the Islamic State. “[Boko Haram] is creating fertile ground for expansion into other areas,” Votel said. “While it isn’t a direct threat to the homeland, it is impacting indirectly our interests in this particular area and creating another area of instability,” the top US special forces officer said. Votel warned that radical Islamic groups are gaining tens of thousands of new fighters.

Rodriguez and Votel’s statements coincided with plans announced by the African Union last week to deploy a 7,500-strong multinational force in the name of fighting Boko Haram and “other extremist groups.” The AU multinational force will serve as the vehicle for further infiltration of US forces into West Africa, while providing support for and legitimizing the already significant US military presence in the strategically crucial, resource region. The intervention will proceed amidst elaborate war game exercises led by US Special Operations Command (SOCOM), known as Operation Flintlock, to be coordinated with a number of West African and European militaries beginning in mid-February. Last week, Chadian jet fighters and ground troops launched cross-border attacks against the Nigerian towns of Gamboru, Kolfata and Malumfatori, reportedly driving Boko Haram fighters out of the area. Boko Haram launched repeated assaults against northern capital of Maiduguri, home to some 2 million residents, reportedly utilizing heavy weapons including RPGs and artillery. The Nigerian military claims that hundreds of Boko Haram fighters were killed during the attacks. 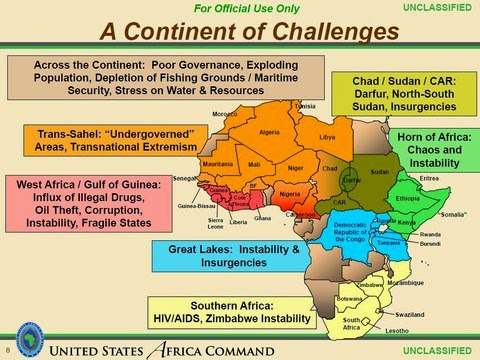 Posted by ajohnstone at 5:12 AM