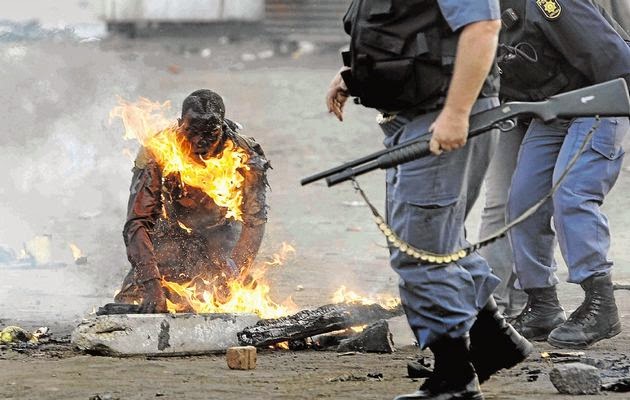 Ernesto Alfabeto Nhamuave was beaten, stabbed and set alight almost seven years ago. Yet nobody has been arrested for his gruesome murder. Police closed the case in October 2010 after concluding that there were no witnesses and no suspects.  Nhamuave, who was 35 years old and from Mozambique, became known as the "burning man" and his agonising death brought the horror of South Africa's xenophobic violence to the world.

Yet when the Sunday Times visited Ramaphosa three weeks ago, we tracked down an eyewitness who pointed out two of the main suspects in the crime. The woman sees the killers at least once a week. Her recounting of details surrounding Nhamuave's death has remained consistent for nearly seven years, when she first revealed details of the murder. At the time she was willing to speak to police. "But the police never came here. Now, I don't trust the police here," she said.

On May 18 2008, Sipho was part of a mob intent on chasing foreigners out of the settlement. "He's the one who stabbed him. He stood over him when he was down and stabbed him, like this," said the witness, motioning downward with a two-handed grip. The mob then wrapped their victim in his own blankets and tried to set him alight. They failed. Bheki*, another attacker, walked to the traffic circle, where a fire was burning, and returned with a flaming piece of wood, which was placed under the man. "Then it worked. He was on fire," the witness said.

Concerns about livelihoods seem similar to cases of xenophobia everywhere else in the world where people seek scapegoats for their deprivation. Unemployment rocketing from 13 percent in 1994 to 25 percent in 2013, or 40 percent by unofficial measures. According to the Economist, “half of South Africans under 24 looking for work have none. Of those who have jobs, a third earn less than $2 a day.” Since 1994, the number of people living on less than one dollar a day has doubled, from 2 million to 4 million. Two million people have lost their homes because of forced removals and inflated rents, and the number of shack dwellers has increased by fifty percent, to the point where today more than one quarter of South Africans live in shacks. The argument holds that as livelihoods become ever more precarious, competition over jobs, housing, and retail have reached extreme levels. In the face of this mounting competition, people seek to leverage whatever social distinctions are most readily available in order to lay claim to diminishing resources. In the context of post-apartheid South Africa, those who believe they have the right to benefit from the promised—but as yet unrealized—fruits of liberation draw lines between themselves and the non-citizens who they believe should not have such a right. The primary problem with immigrants according to local people is that they undermine the economic opportunities of local citizens. According to my interlocutors, they do this by both outcompeting South African–owned businesses in the informal economy, and by undercutting the labor market by working for rates far below the minimum wage, allegedly as low as R25 per day. Thus the ubiquitous complaint that “foreigners are stealing our jobs.” The strength of this xenophobia is the fear of the unknown”. Add to this the fact that people are competing against their neighbors for scarce jobs in a context in which livelihoods are increasingly precarious, and you have a recipe for disaster. People are forced to establish claims to limited resources by defining the others who do not belong, who should not belong, and who never can belong. In other words, by xenophobia.

In addition to job theft, the men also accused foreigners of stealing their women by wooing them with cash, outdoing the local competition because they have fewer financial responsibilities to kin. Marriage rates, down to less than half of 1960 levels, so that today only 3 of 10 South African adults are married. With unemployment rates as high as they are, most young men find it impossible to raise the resources they need to pay lobola (bridewealth) and establish their own legitimate, respectable homes. They suffer from a crisis of masculinity, having been expelled from the path to manhood that was encouraged under apartheid—that of becoming umnumzane, a respectable, working-class family man. Instead, they find themselves in their thirties and still living with their mothers, earning the social derision due to umnqolo—a “mamma’s boy.” Immigrants are accused of being able to make do with very little money for wages because they come here with no responsibilities. If they get R25 per day they have enough to eat. They don’t have responsibilities. They don’t have wives.  Residents accuse immigrants of hoarding their money without reinvesting it in the community through exchange. People accuse them of impregnating local women without paying bridewealth or cleansing fines (inhlawulo). Immigrants are perceived to traffic in the pure commodity, accumulating only for themselves while avoiding entanglement in relationships of reciprocity, in stark contrast to South Africans who are increasingly burdened by debt obligations. This representation is inaccurate, of course, as most immigrants remit to their home countries and are deeply embedded in transnational kin networks, while many young South African men father children without providing for them. Yet the stereotype retains its power.

Why are foreigners so often killed by burning? Why are they not lynched or beheaded? In the 1990s, young unemployed males burned accused-witches while chanting the words “Die, you witch; we can’t get jobs because of you!” Foreigners use witchcraft, or, in IsiZulu, ubuthakathi. Just like witches, immigrants are said to participate in forms of accumulation that are considered immoral and anti-social, enriching themselves at the expense of others. This makes it not only thinkable for people to orchestrate violence against immigrants, but also gives the violence the aura of legitimacy, for it appears to be in the service of morality.