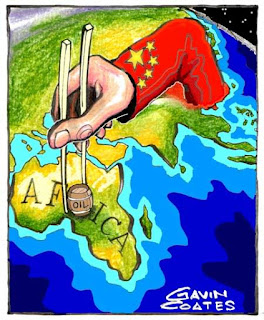 China-Africa trade reached 220 billion in 2014 and is estimated to be about $300 billion in 2015. At the Forum on China-Africa Cooperation (FOCAC) , hosted in Johannesburg in December China’s President Xi Jinping pledged $60 billion to African states. What does that mean exactly? Large figures like $60 billion require cautious analysis. This isn’t aid in the traditional sense. Most of the announced $60 billion will come in loans and export credits. Only $5 billion is to arrive as grants and interest-free loans. Outsiders know very little about the other $55 billion. China has announced the general outline of its commitments. For instance, $35 billion will go towards preferential loans, export credits, and concessional loans. Another $5 billion will go to the China-Africa Development Fund, a private equity and venture capital investment arm of the China Development Bank that has a lot of problems finding bankable projects.There’s $5 billion for the Special Loan for the Development of African SMEs, another financial vehicle implemented by the China Development Bank that operates on a commercial basis. Finally, $10 billion will create and offer the initial capital for the China-Africa production capacity cooperation fund, which might be an entirely new project — but we are not completely sure.

Announcements at FOCAC summits usually outline three years’ worth of money—but no dates were announced. It might not all be new capital. Often, the figure includes projects already initiated. FOCAC’s financial goals are often reached well before the end of three years — or conversely, it may take longer than three years to allocate all the funding.

So China is investing a lot in Africa? Not really. Most of these large China-Africa deals are carried out via loans financed by Chinese policy banks. They are not foreign direct investment, in which a company or entity from one country invests in another country’s company or entity, and has the foreign investor owning at least “10% of the voting power of the direct investment enterprise.” Unlike other investments, such as portfolio investments, FDI includes investors actively looking to influence how the enterprises are managed. China recently announced that its cumulative foreign direct investment into Africa from 2000 to 2014 is $30 billion. As of 2012, China has been investing a little more than $2 billion annually into Africa. That may be a lot — but it’s less than the U.S.’s annual investments in Africa. Furthermore, last year’s 40 percent drop in official Chinese investment in the first half of the year is not that significant because the base amount is low. not all FDI is registered and catalogued with their respective government. For these unofficial flows, China is investing $6 billion in Africa compared to $8 billion from the U.S. These figures are tough to parse. Ministry of Commerce actually does try to release accurate data, but not every Chinese enterprise will register with MOFCOM.
It’s not clear whether China’s official accounting includes investments from Hong Kong and Macau, which have some autonomy from Beijing but often serve to channel both official and unofficial Chinese finance back into mainland China to take advantage of tax benefits, a process called round tripping. China invests less than 5 percent of its FDI stock, which is the cumulative level of FDI at any given time, in Africa, and exact figures are hard to pin down.

Essentially most Chinese money in Africa is in the form of loans – but there is no real correlation between aid and other resources. OECD-defined Chinese aid into Africa is a little over $2 billion a year, while U.S. aid is around $8 billion. President Xi announced $156 million in emergency food aid in his speech at FOCAC, and before that at the United Nations he pledged $100 million in military aid to the African Union, but those sums are far less than the billions in project financing offered by Chinese policy banks. Although the FOCAC action plans outline cooperation projects multilaterally – that is, among China and several African states – China delivers on the projects bilaterally. This means that FOCAC summit announcements do not actually detail who gets what. For instance, we know in general that Xi announced that “China will train 200,000 technical personnel,” but we do not know which countries will get these training opportunities. China also announced partnerships between 10 Chinese and 10 African agricultural institutes, aimed at modernizing African agriculture. The action plan does not actually specify which countries will be in the partnerships or receive one of the “100 programs on clean energy, wildlife protection, environmentally friendly agriculture and smart city construction.”

That means African state leaders and other stakeholders will be competing for these sums of money.

Posted by ajohnstone at 4:32 AM