The Curse of Oil 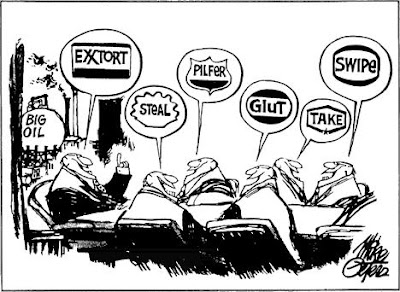 Time magazine reports that yet another nation in West Africa believes it is about to benefit from the discovery of oil . Seismic tests have suggested that São Tomé and Principe, two islands off the coast of West Africa with a population of 199,000, might be sitting on billions of barrels of oil .

But even if São Tomé and Principe were sitting on as much oil as Saudi Arabia, there would be no guarantee that the black gold would deliver happiness and prosperity to its people. On the contrary, if history is any guide, vast caches of oil can cause developing nations as many problems as they solve. It fuels corruption rather than development, and creates a combustible mix of great wealth, relative poverty, grievance and instability .

Economists often talk of the "curse of oil," pointing out that countries with resources such as oil often grow more slowly, more corruptly, less equitably, more violently and with more authoritarian governments than others do.

There is "a strong association between resource wealth and the likelihood of weak democratic development, corruption and civil war." - Escaping the Resource Curse by Jeffrey Sachs, Joseph Stiglitz and Macartan Humphreys .

In Angola, the government collected $10 billion in oil revenues in 2005 but the gains are not evenly spread. 70% of Angolans still live below the country's poverty line. Cholera and malaria are rife, and child mortality rates are among the worst in the world. In Angola a 2004 Human Rights Watch report claimed that $4.22 billion in oil revenues went missing between 1997 and 2002.

"The rich use mineral water. For us there is no water. No electricity or sanitation either."

The second stage of the oil curse kicks in at this point. Investment in other industries gets crowded out, in part because it's hard for them to provide high enough returns to meet the costs of rising rents and salaries. Oil becomes virtually the only game in town, and the benefit to workers is surprisingly limited, with many of the more lucrative jobs — such as rig operator and refinery manager — going to foreign experts. Hence the expat enclaves in oil towns from Port Gentil to Baku. In some cases, unemployment can actually worsen. Fueled by the new spending power of the few, the cost of living also goes up. Higher prices mean real poverty actually rises.

Nigeria pumped its first barrel of oil in the 1950s and in 47 years, Nigeria has suffered a civil war that killed a million people, 30 years of military rule and six coups.

Meanwhile, two-thirds of the country's 135 million people remain in poverty, a third are illiterate and 40% have no safe water supply. Then there is the environmental cost: more than 1.5 million tons of oil have been spilled over 50 years, and the Niger Delta is one of the most polluted places on earth.

"God has given us everything in the Delta: water, fish, oil. And yet we are suffering. That is our cross...We will share our pain with all Nigerians." - Movement for the Emancipation of the Niger Delta vowing a new campaign of attacks against creek- and land-based installations around the Delta. Car bombs will be freely utilized.

And when the well runs dry ?

Gabon is at the beginning of the end of its life as an oil producer, output is expected — optimistically — to halve in the next 20 years and stop in 30.
15,000 people in Gabon hold 80% of the nation's wealth. 124th on the human-development index .Yet the capital Libreville itself has ranked among the Top 10 most expensive cities in the world for most of the past 20 years Hummer and BMW dealerships for the local privileged elites . In a country that is four-fifths rain forest and has coastal waters full of fish nearly all the country's food is imported from Europe.
Gabon is afflicted by a widespread sense of moral degeneration — from bureaucratic corruption to petty theft to sexual violence.

"The lack of standards shown by Gabon's leadership has generated a complete immorality in the country," says a European economist in Gabon. "That's the real curse of oil."

In São Tomé the dream lives on but from the lessons and experience of other African nations , it will all end up a nightmare .

Unless of course there is democratic control and common ownership of natural resources by all the peoples of the world to satisfy human needs and not to provide profits for the few .
Posted by ajohnstone at 1:14 AM