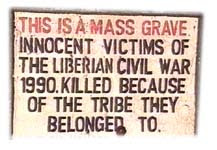 Charles G. Taylor may still have access to considerable wealth amassed during his presidency, despite claiming penury at his war crimes trial . A U.N. panel says Liberian ex-leader’s wealth hasn’t vanished . At his trial on 11 war crimes and crimes against humanity in The Hague on June 4, Taylor refused to appear, saying he was too poor to afford his own defense .

Taylor’s claims of penury are a surprising turn of events for a man believed to have stolen hundreds of millions of dollars from Liberia and neighboring Sierra Leone, which he dragged into a civil war that lasted more than a decade. Taylor built a fortune in kickbacks from sales of the rich array of natural resources from both countries.
In his time as a warlord and later as president of Liberia, Taylor extracted millions in exchange for tax breaks and a wide range of other favors for businessmen who hauled off billions’ worth of treasure from Sierra Leone and Liberia in the nearly two decades they spent embroiled in interconnected civil wars.

The report details of one such deal between Mr. Taylor and Natura Holding, which hauled thousands of tons of hardwoods from Liberia during the civil war. According to a 2001 statement of account from the Ministry of Finance of Liberia unearthed by researchers, a subsidiary of the timber company, Natura, was credited for paying $2 million in taxes on July 17, 2000. The next day, a deposit from Natura for almost the same amount appeared in Taylor’s personal account, according to a bank statement. He is believed to have entered into similar deals with the Oriental Timber Company, which was partly owned by Guus van Kouwenhoven, a Dutch businessman who was convicted in a Dutch court in 2006 of smuggling arms for Taylor.

In an earlier report last year, the United Nations panel of experts said evidence suggested that Taylor had “made significant investments in Nigeria, such as in real estate,” the report said.
But efforts to trace his fortune have bumped up against resistance in Nigeria, where the panel of experts says he has made a number of investments, and Liberia, where he is connected, through intermediaries, to one of the country’s biggest cellphone networks. The Nigerian government refused to allow the panel, a group of financial analysts and specialists in the timber and diamond trades, to travel to Nigeria to investigate Taylor’s finances, according to the report. Nor have Nigeria and Liberia frozen assets believed to be connected to Taylor .

By control of the most mineral- and timber-rich regions of the country, Taylor gained, by some estimates, $100 million a year in the early 1990s and amassed a personal fortune estimated at half a billion dollars while in power in Liberia .