The Scramble for Bio-Fuel in Africa 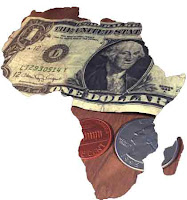 Apart from the frenetic Scramble For Oil in Africa that is currently taking place ( see earlier blog entries here and also here and here ,here , too, as well as here and here ) , but there is now also the beginnings of a frantic , feverish Scramble For Bio-Fuel ( or agro-fuel as some quarters call it ) - ethanol production - in the African continent . The EU alone wants to see at least 10% of road fuel derived from plants by 2020 and to achieve that aim it has to acquire resources .
The GRAIN report says its research shows show that governments and biofuels firms in developing countries are collaborating to push hundreds of thousands of indigenous people and peasant communities off their land.
GRAIN said: “The numbers involved are mind-boggling… an agrofuel lobby is speaking of 379 million hectares being available in 15 African countries. We are talking about expropriation on an unprecedented scale."
Brazil, largely by way of the state-owned oil company Petrobrás, has cut deals for ethanol imports and technology transfer with a range of African countries, from Senegal to Nigeria, Mozambique to Angola
Viscount Energy (China) Memorandum of understanding with the Ebonyi state government in Nigeria to establish a US$80-million ethanol factory in Nigeria using both cassava and sugar cane.
21st Century Energy (USA) Plans to invest up to US$130 million over the next five years in the production of ethanol from sugar cane, maize and sweet sorghum, and later to manufacture biodiesel from cottonseed and cashew nut residues in Cote d’Ivoire.
Bioenergy International (Switzerland) Plans to set up a 93,000-hectare jatropha plantation with a biodiesel refinery and an electrification plant in Kenya.
Sun Biofuels (UK) In association with the Tanzania Investment Centre (TIC), has acquired 18,000 hectares of top quality agricultural land for jatropha production.
AlcoGroup (Belgium) Bought South Africa’s NCP Alcohols, Africa’s largest producer of fermentation ethanol, in 2001.
MagIndustries (Canada) Acquired a 68,000-hectare eucalyptus forestry plantation and is constructing a 500,000-tonnes per-year wood-chipping plant near the port city of Pointe-Noire in the Republic of Congo. The wood chips will be shipped to Europe for use as biomass.
Aurantia (Spain) Investing in oil-palm plantations and possibly four biodiesel refineries in the Republic of Congo.
Dagris (France) Investing in the development of biodiesel production from cottonseed oil in Burkina Faso through its local oil processor SN Citec.
SOCAPALM and Socfinal (Belgium) Plans to expand its 30,000-hectare oil-palm plantation in Cameroon .

Rather than improving energy security, biofuels will create a new problem of food insecurity, for the price of the national staples, cassava and palm oil, will almost certainly rise substantially when agrofuel production is under way. This year South Africa is running a deficit in its maize production, instead of the expected surplus. In only the last six months the “ethanol effect” (that is, the extra demand from the ethanol producers), combined with a drought in Southern Africa, have caused maize prices to skyrocket, with a percentage increase four times the level predicted in the Biofuels Strategy. As maize is the country’s staple food, the poor are suffering most.

There is evidence elsewhere that leads many to believe that agrofuels may, in part, be a smokescreen for the investors’ real agenda, which is to obtain land. The agrofuels sector, which is only a few years old, is almost entirely unregulated. In the confusion investors are obtaining large chunks of land for nominal fees. One ministry of energy official confided in an off-the-record briefing: “It is possible that the whole thing is being abused by night-flyers, since the right hand doesn’t know what the left is doing.” By the time the government wakes up to what is happening, many more of the country’s precious natural resources will have been destroyed .
In South Africa, the Eastern Cape government is to make 3 million hectares of “under-utilised” and fertile communal land available for agro fuel investments. One such project involves the planting of 70,000 hectares of canola for export by German investors. Rural communities use this land in several ways, including grazing, and it makes a considerable contribution to their livelihood. South Africa has a long history of expropriating rural communities or restructuring land use in a way that impoverishes them. This new scheme for taking land away and using it to plant crops for export is, unfortunately,
just more of the same.
“Southern Africa has the potential to be the Middle East of biofuels”, said Andrew Owens, CEO of the UK’s Greenergy at an agrofuels meeting in Cape Town.
But as in any other sector of agribusiness, corporate profit with agrofuel crops is best assured when these plantations are on the most fertile lands, close to major transportation routes. Millions of small farmers still occupy these lands. In Tanzania, the prime minister is fast-tracking agrofuels to accommodate a Swedish investor looking for 400,000 hectares in the Wami Basin, one of the country’s major wetlands, to plant sugar cane for ethanol. The project will inevitably displace local small-scale rice farmers. In Liberia, a UK company, Equatorial Biofuels, acquired Liberian Forest Products (LFP), which holds management agreements and permits covering over 700,000 hectares of land for the cultivation of oil palm. In Ethiopia, where land pressure is high, over 1 million hectares are being granted to agrofuel corporations to grow mainly jatropha, a potentially invasive species that is being introduced on a large scale without proper environmental impact assessments .
The truth is that the agrofuels boom in Africa is not about rural development and improving the living standards of poor farmers. On the contrary, it is about foreign companies taking over the land: by striking deals with government officials and lobbying for legal protection, subsidies and tax breaks; by acquiring scarce fertile land and water rights; by coercing farmers into becoming cheap labour on their own land; by introducing new crops in large-scale plantations; by introducing GM crops through this backdoor; by displacing people and biodiversity-based systems; and by enslaving Africa even more to the global market. Land grabbing on an unprecedented scale is on the march in Africa.
The agrofuels boom is being driven by the government’s desire to increase export earnings, mainly through the export of cassava and sugar cane for agrofuels. The reality is that, just as in the case of oil and all other global commodities, the market will fix the price of agrofuels. The country of origin will have little control, especially if ownership of the whole value chain is in the hands of international companies. The production of agrofuels will not guarantee cheap fuel to the local population.
Bio-fuels will not improve the lot of the vast majority of African people for various reasons:-
First, the poor simply cannot afford them because they do not have money to buy energy, but rely on wood, charcoal and dung.
Secondly, it makes no sense for rural families to replace their sustainable and food-secure agricultural systems and forests with foreign-owned industrial plantations and in the process become cheap and dispensable labour.
Thirdly, the privatisation of the land that is the source of Africa’s wealth will undermine any chance that Africans have of determining their own future.
The aim of capitalism is not to satisfy people's needs but to accumulate profits. This is not a policy choice but an economic necessity imposed by the operation of impersonal and uncontrollable economic laws which governments have to abide by, unless they want to risk making things worse by provoking an economic crisis and stagnation in the area they rule over.
Governments put profits before poor people because they are obliged to by the impersonal workings of world market forces, not out of choice. The same goes for the capitalist corporations. Their whole purpose is to make a profit on the capital invested in their businesses so that their shareholders can benefit. That's the nature of the beast . As long as the international capitalist system continues to exist, its economic laws will operate.
What is required is the end of the economic principle "can't pay - can't have" , not a reform of this system but its abolition and its replacement by one in which the Earth's resources become the common heritage of all humanity. Only on this basis can these resources be mobilised to eradicate world poverty and ensure a decent life for every man, woman and child on the planet. Yes, the world and Africa does possess the wealth and means to end world poverty .
Posted by ajohnstone at 6:41 PM