The Fetishism of Money and Aid 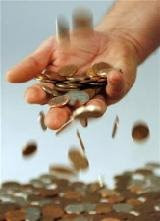 "Don't believe them when they say there is no money. There is more wealth than ever before. The money is just not getting channeled to people who are so poor that they are dying. There is no shortage of money in the world...Too much money is spent on meetings, conferences and workshops that lead nowhere. Money should be spent on concrete actions, instead. Development starts with money . First the financial resources should be made available; then systems should be put in place, paid for with those financial resources. The result would be "real paved roads, real electricity, real infrastructure."

How often do we hear it said, “we do not have the resources”? What is meant by resources is always money.

Every day politicians give lack of money as a reason why we cannot provide better health care or the many other public services that are in urgent need of improvement. Money is fetishised as having the power to solve problems because without it nothing can be done.
They ignore the fact that productive resources are materials, means of production, transport, energy, communications and networks of infrastructure through which goods and services are produced. And all these depend on one single resource which is labour. These are the real resources on which the lives of communities depend and there is an abundance of labour to provide for needs.

They are unable to see the availability of real resources because their minds are pre-occupied by the illusion that only money resources count. Reliance on the imagined powers of money runs through every social problem. They imagine that real resources can only be brought into use by money, whereas the opposite is the truth. The powers of the community to solve problems can on be fully released with socialism and the abolition of money.

Development plans like the United Nations Millennium Development Goals rely on the uncertainties of the market system and the use of money . Socialists say these promises are guaranteed to fail . Capitalism is concerned with profit-and-loss accounting, as its aim is to produce monetary profits . Plans in socialism would be drawn up as a list of the materials and labour required to satisfy the "Development Goal" .

William Morris said over a century ago:

"The palliatives over which many worthy people are busying themselves now are useless because they are but unorganised partial revolts against a vast, wide-spreading, grasping organisation which will, with the unconscious instinct of a plant, meet every attempt at bettering the conditions of the people with an attack on a fresh side."
Posted by ajohnstone at 4:12 AM