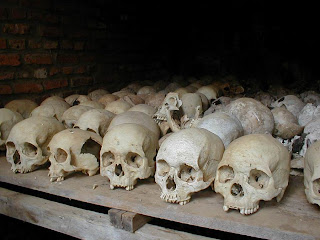 The instability that has plagued the Great Lakes region has always been distorted by both the perpetrators of the crisis and ignorant political analysts. This article presents a socialist viewpoint of the problem .

From African Socialist 7
Posted by ajohnstone at 2:50 AM

Tragically, Rwanda is best known for the horrific genocide that occurred in 1994. Nearly a million people, or about 10% of Rwanda's population, were killed. Females represent 70% of Rwanda's population since so many men had been killed. They are now making a living by selling their homemade peace baskets to provide food and shelter for their family. Art is a wonderful thing, especially when made with blood, sweat and tears.

The sale of these beautiful, handmade baskets plays an important role in Rwanda's evolution. These beautiful peace baskets are a great conversation piece for your home and at the same time you can help others help themselves.
See the peace baskets at link below.
http://naturalsupply.blogspot.com/2007/06/help-others-help-themselves.html