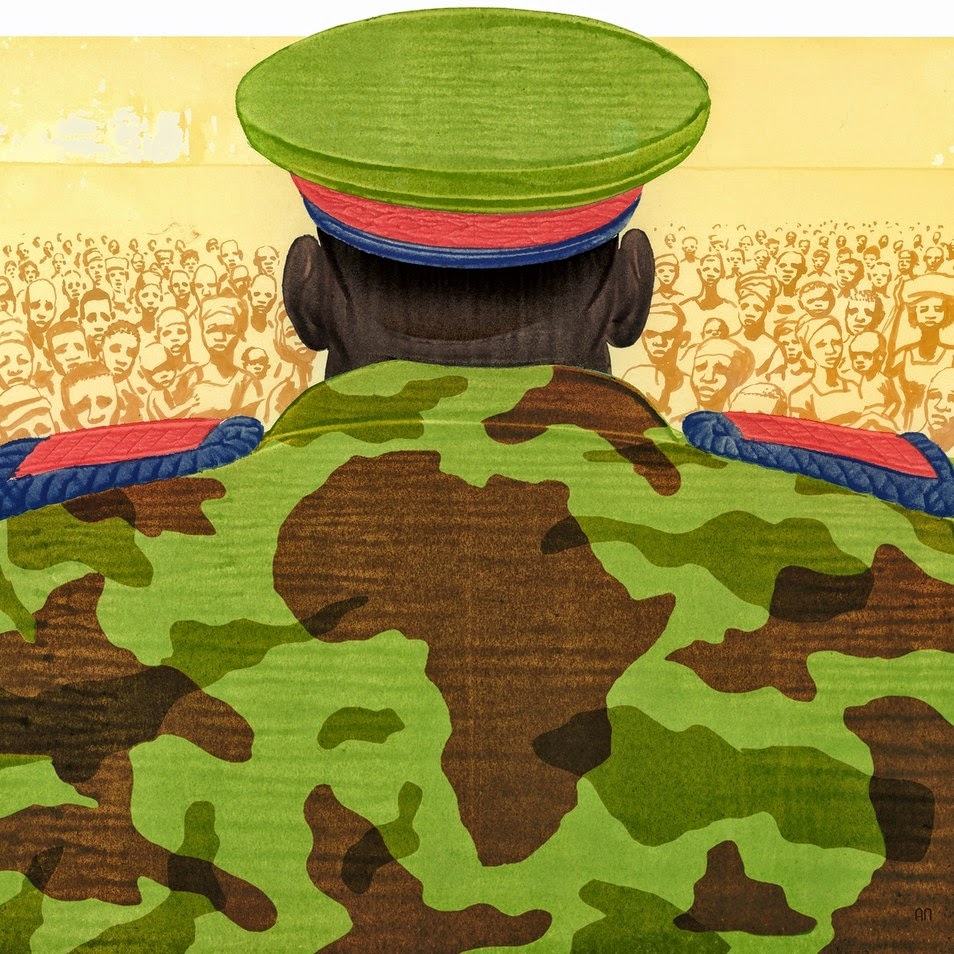 As many remember Nelson Mandela on the anniversary of his death, his hopes seem as far away as ever. For now, the advance of democracy in Africa appears to have stalled. Elections have now been held across the continent, but their credibility varies. In some countries, rulers deploy state security forces to marginalize opposition leaders. Less autocratic leaders foster loyalty by doling out state jobs and other perks that would raise eyebrows even in many developing nations. In 1990, just three of Africa’s 48 countries were electoral democracies, according to Freedom House, a Washington-based pro-democracy advocacy group. By 1994, that number had leapt to 18. Two decades later, only 19 qualify. In many African countries, soldiers have run the show since the earliest days of colonialism. In the late 1800s, Europeans recruited local men into new armies to help conquer a vast continent. Throughout the imperial century that followed, Europeans used those colonial brigades to repress the African lawyers, civil servants and journalists who were agitating for independence. Today, blue-chip companies such as Wal-Mart Stores Inc. and General Electric Co. are expanding into countries whose leaders have never faced a real electoral contest.

Two decades of elections and economic progress in Africa haven’t erased the vast power that militaries have long wielded in many countries, large and small. In much of Africa, in fact, the armed forces have gained influence in recent years as battling Islamist terrorists has become a priority. The military remains a swaggering presence in Nigeria, Africa’s most populous country. On the surface, the country is a flourishing democracy. President Goodluck Jonathan, one of the first elected Nigerian leaders who didn’t come from the military. But Nigeria’s army—which led the country almost nonstop from 1966 to 1999—still wields considerable power. A fifth of Nigeria’s nearly $30 billion budget goes to the armed forces. When Kashim Shettima, the governor of a state in Boko Haram’s heartland, complained that the army was being gutted by corruption, Mr. Jonathan threatened on television to remove the soldiers guarding Mr. Shettima’s house, exposing him to attack by Boko Haram.

The military has defended Mr. Jonathan, too. Soldiers have blocked opposition leaders from landing at airports during their campaigns, and in June, soldiers confiscated bundles of newspapers containing articles criticizing government corruption.

The U.S. trained some 52,000 African troops in 2013 alone, at a cost of $99 million. After Liberia’s 14-year civil war ended in 2003, the U.S. paid security contractor DynCorp International, based in McLean, Virginaa, to train the country’s new, 2,000-person army. Other institutions like the health ministry received scant attention.

“There are signs of the predatory nature of military rule” returning to Africa, said Larry Diamond, director of Stanford University’s Center on Democracy, Development and the Rule of Law. “This is a calamity for a number of these countries.”

Many African countries, such as Angola and Sudan, are resource-rich, single-party autocracies that have consolidated their grip on power. Angola’s president, José Eduardo dos Santos, is a military commander who has used his country’s vast oil wealth to build a police network that has helped to neutralize rivals for more than 30 years. In 2012, his party won more than two-thirds of the vote in elections that observers called deeply flawed. Nations that underwent the Arab Spring have regressed back to military dictatorship as in the case of Sisi’s Egypt or become militia civil war zones as in Libya. Africa has weathered more than 60 coups between 1960 and 1990, according to the African Development Bank. Some overturned election results that military leaders found unpalatable; others promised to stamp out political corruption, took over and became corrupt themselves. A whole generation of elected leaders is now angling for more time in power. Next year, both Faure Gnassingbé of Togo and Joseph Kabila of Congo are expected to seek third terms. (Mr. Kabila will have to change Congo’s constitution to do so; Togo has no term limits.) Both men inherited power from their fathers, who were ex-military leaders.

Robert Mugabe, 90, has ruled Zimbabwe since 1980. This week, he tightened his grip on power at a party conference by sidelining perceived rivals and backing his 49-year-old wife, Grace, for a senior party post. And former rebel commander Paul Kagame, Rwanda’s president since 2000, is widely believed to be weighing a constitutional amendment that would allow him to remain in power beyond his second elected seven-year term, which is set to end in 2017.

Posted by ajohnstone at 4:48 AM