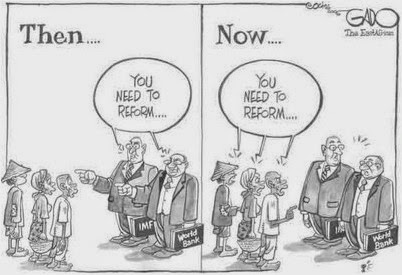 In a report published online last week in The Lancet Global Health the four researchers, professors from three British universities, accuse the International Monetary Fund (IMF) through its strict lending policies of contributing to the Ebola crisis. "A major reason why the Ebola outbreak spread so rapidly was the weakness of healthcare systems in the region, and it would be unfortunate if underlying causes were overlooked," said lead author Alexander Kentikelenis. "Policies advocated by the IMF have contributed to under-funded, insufficiently staffed, and poorly prepared health systems in the countries with Ebola outbreaks."

Kentikelenis and co-authors explain that IMF's economic reform programs forced reduced government spending, IMF may put caps on funds for government wages, including healthcare professionals, and it pushes for decentralization of healthcare systems, which "can make it difficult to mobilize coordinated, central responses to disease outbreaks. All these effects are cumulative, contributing to the lack of preparedness of health systems to cope with infectious disease outbreaks and other emergencies," they write.

Other observers have also made a connection between such economic policies and the deadly outbreak. Emira Woods, a Liberian director at ThoughtWorks, a technology firm committed to social and economic justice, in an interview with Common Dreams explained "A crisis of the proportion we've seen since the beginning of the Ebola catastrophe shows this model has failed." While years of war played a role in weakening public systems, it is the "war against people, driven by international financial institutions" that is largely responsible for decimating the public health care system, eroding wages and conditions for health care workers, and fueling the crisis sweeping West Africa today, said Woods.

Even the World Health Organization, which is tasked by the United Nations with directing international responses to epidemics, acknowledges the detrimental impact these policies have had on public health systems. "In health, [structural adjustment programs] affect both the supply of health services (by insisting on cuts in health spending) and the demand for health services (by reducing household income, thus leaving people with less money for health)," states the organization. "Studies have shown that SAPs policies have slowed down improvements in, or worsened, the health status of people in countries implementing them. The results reported include worse nutritional status of children, increased incidence of infectious diseases, and higher infant and maternal mortality rates. Depressing peoples' access to healthcare greatly increases their susceptibility to all diseases and pathologies.

The important thing to remember is that the destruction of the healthcare systems in these countries has not been accidental; it has been deliberate. This epidemic was as much a man-made disaster as a natural one. Austerity kills. Capitalism kills
Posted by ajohnstone at 4:40 AM