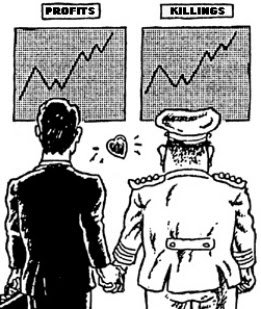 Faced with the world’s worst contemporary humanitarian crisis in Yemen,  South Africa has abandoned this commitment to human rights in exchange for the chance to profit from weapons deals. In so doing, it has become complicit in war crimes in Yemen. All indications are that South Africa’s arms trade regulator, the National Conventional Arms Control Committee (NCACC), continues to approve permits to export weapons to Saudi Arabia and the UAE, despite the extensive public evidence of war crimes committed by those states. South Africa is one of the numerous states profiting from the conflict in Yemen.

South Africa has repeatedly expressed concern about the humanitarian suffering in Yemen. At international forums, South African officials have urged all parties to respect international law and to find a solution to the conflict. Yet, at the same time, the South African state has hypocritically given the green light to arms companies to sell weapons to both Saudi Arabia and the UAE, two of the main parties accused of committing war crimes in Yemen.

The United Nations Group of Eminent Experts on Yemen and Amnesty International have identified many of these South African weapons in Yemen. These include drones, surveillance equipment, armoured vehicles, and most notoriously, 120mm mortar bombs, whose remnants were discovered at the site of an attack on civilians in the Yemeni city of Hodeidah. Two independent investigations, one of them by the UN experts group on Yemen, found it most likely that these mortars were manufactured by South African arms firm Rheinmetall Denel Munitions (RDM). RDM is a joint venture between German arms company Rheinmetall Waffe Munition GmbH (which holds a 51 percent stake) and South African state-owned arms company Denel (with 49 percent). RDM not only sells weapons to Saudi Arabia and the UAE, but has also established a munitions factory in Saudi Arabia in 2016. The factory specialises in, among other things, the production of 120mm mortar bombs.

In addition to the 120mm mortar remnants found at the site of an attack in Hodeidah, that have been identified as likely produced by South Africa’s RDM, Rheinmetall’s Italian subsidiary has also been implicated in supplying weapons used in civilian attacks in Yemen. Remnants of bombs used in an air attack by the Saudi-UAE coalition on Deir al-Hajari in northwest Yemen in 2016 were identified as being manufactured by RWM Italia – a Rheinmetall subsidiary in Italy. That attack killed a family of six, including a pregnant woman and her four young children.

Germany, another top supplier of weapons to the conflict in Yemen, was among the first to put a ban in place. In March 2018, a new coalition government in Germany imposed a ban on the export of any weapons from Germany to Saudi Arabia and other countries “directly involved” in the Yemen civil war. Despite the ban, Rheinmetall subsidiaries around the world including RDM in South Africa, have continued to supply weapons to Saudi Arabia. Activists have raised concerns that this is part of a pattern of “offshoring”, whereby Rheinmetall and other European arms companies use subsidiaries in other parts of the world to sidestep domestic bans. By 2019, Rheinmetall had direct or indirect holdings in a staggering 156 companies and offices or production facilities in 129 locations across 32 countries. This places Rheinmetall in a prime position to do precisely this.

South Africa has a choice to make. Will it continue to ignore the evidence of war crimes and attacks on civilians in Yemen? If it chooses to do so, companies like Rheinmetall will continue to use South Africa for exports despite domestic restrictions on sales to countries with dubious human rights records.

For the suffering in Yemen to end, corporations in South Africa too must stop profiteering from this unjust war.