The irony of Africa – a continent so rich, yet so poor 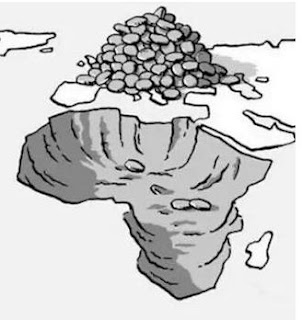 Africa is not poor. Africa is rich in resources, but the continent and its people have been exploited for decades and mis-governed.

The Democratic Republic of Congo (DRC), with its untapped deposits of raw minerals estimated to be worth in excess of $24-trillion, is widely considered to be the richest country in the world. It has large reserves of cobalt, gold, gems, copper, timber and uranium. However, the most valuable resource that the DRC possesses is its large reserve of diamonds. It has one of the largest forest reserves in Africa, the world’s second-largest rainforest and about half of the hydroelectric potential of the continent.

Zambia is the continent’s biggest copper producer and has the world’s ninth richest copper deposits. The big four mines, Barrick Lumwana, FQM Kansanshi, Motani and Konkola Copper Mines (KCM), account for around 80% of Zambia’s annual copper production. Most copper is used in electrical equipment such as wiring and motors, in construction, and industrial machinery (such as heat exchangers).  Barrick Lumwana is wholly owned by the Canadian company Barrick, which is one of the world’s largest gold mining companies. The other three each have a majority foreign shareholding. The Zambian government, through its investment holding company, ZCCM-IH, is a minority shareholder in nearly all of them.

Ghana is Africa’s largest gold producer and is also a major producer of bauxite, manganese and diamonds with 23 large-scale mining companies. There are also over 300 registered small-scale mining groups and 90 mine support service companies. The mining industry in Ghana accounts for some 5% of the country’s GDP and minerals make up 37% of total exports, of which gold contributes over 90% of the total mineral exports.

Nigeria is the world’s 11th-largest and Africa’s biggest crude oil producer, with 18 operating pipelines and an average daily production of over two million barrels in 2019. The petroleum industry accounts for about 9% of Nigeria’s GDP and for over 90% of oil export value.

Arlit, the uranium mining operation in  Niger, ranks as the fourth largest in the world by uranium production.

None of the African countries benefit and all export, only to re-import finished products, often at about 10 times the original cost.

This guarantees jobs on other continents, mostly Europe, but condemns Africa to a self-perpetuating, vicious cycle of abject poverty.

The irony of Africa and Covid-19 – a continent so ric... (dailymaverick.co.za)

Posted by ajohnstone at 6:26 AM