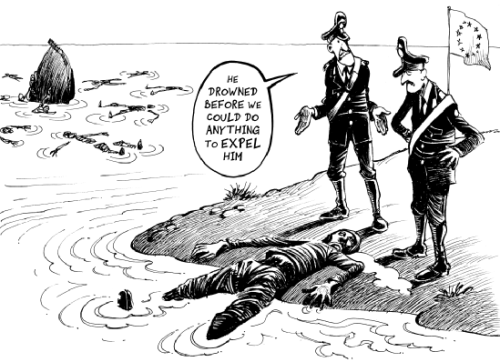 While world attention is focused upon the xenophobic riots against foreigners in South Africa that many claim was instigated by politicians such as the Zulu king, the United Nations draws attention to the shameful complicity of governments in the deaths of many hundreds of migrants and refugees in Europe.

Anti-immigrant rhetoric from politicians across Europe, including Britain, is blocking attempts to introduce large search-and-rescue operations in the Mediterranean that would save large numbers of migrant lives, Laurens Jolles, the United Nations High Commissioner for Refugees (UNHCR) representative in Italy, has warned. Jolles said political expediency was preventing measures being taken to reduce migrant deaths. “In many countries in Europe at the moment, the [political] dialogue and the rhetoric is quite extreme and very irresponsible,” he said. Jolles said: “Because of elections and because of the economic crisis, it becomes difficult for those parties who traditionally would not follow on those same lines to counter the rhetoric with the strength that they should.

“It’s a fear of foreigners, which is a logical fear, a natural fear, but it is being exploited for populist or political reasons, especially in election periods.” He continued, “The level of this dialogue compared to 20 years ago is just incredible. It wouldn’t have been possible in the past, the racist rhetoric, the rhetoric of intolerance. In the 60s, 70s and the 80s, we would never have accepted this,” said Jolles.

The UK Foreign Office says it will not support future search-and-rescue operations because they encourage migration. “The fact that the UK has made it clear that it does not wish to participate in contributing measures to a rescue operation, or putting in place a rescue operation in the Mediterranean, is very concerning,” said Jolles.

In December, the UNHCR appealed to the EU to provide 130,000 resettlement places for Syrians displaced by the civil war. Germany has pledged to take 30,000 and Sweden 2,700. The remaining 26 EU states are taking 5,438 between them, with Britain taking just 143.

“The UK should be participating and contributing in a European context to solidarity measures and trying to fulfil its part making it easier to deal with these [migration] flows,” said Jolles. “If one really wants to tackle the problem and ensure that there are less deaths, then the thing to do is to look at providing legal avenues to come to Europe. There is an obligation, both moral and legal, to try and do something. People will die.”

The UNHCR is concerned that rather than helping to create a safe passage for migrants, the European commission is more concerned with trying to stop people entering. “What we are hearing is that there is more dialogue on how to prevent people coming to Europe and how to stop them than how to manage the flows and what to do when these persons come into Europe,” said Jolles.


In order to ward off unrest various tactics are employed by governments. One of them is creating divisions among the suffering masses by, for instance, blaming foreigners and whipping up nationalistic feelings. This diverts attention from misrule and mismanagement. Secondly, and in response to the official lies, the masses who are hungry, sick and illiterate are taken in by the government's ploy. Now, since a hungry man is an angry man and since anger is emotional and overpowers reason, the least provocation can result in violence-often misdirected. Such violence can be vented against fellow citizens usually manifested in riots and civil wars. The violence is also invariably be turned loose on the "aliens". This is the real cause of xenophobia-the rich pitting the poor against the poor. In fact wealthy "foreigners" are rarely affected.

The real solution will be to eliminate the present situation of a minority owning the means of production and distribution of wealth whilst the majority owning nothing, have to work for the few. In other words money, buying and selling, commodities and the like must be done away with. Humanity must commonly own the means of production and must have free and equal access to the produce. Under such circumstances there will be no want and consequently no war and hatred. But this type of system can only be possible when people make efforts to understand it. When they understand and want it, they can organise to usher it in.

South Africa and the EU are not very much different in essence when their ruling class seek to divide and rule, even if both vehemently deny that charge. The facts and evidence says otherwise.
Posted by ajohnstone at 1:06 AM