Not so long ago, investment bankers and economic analysts were saying Africa was the next big thing in global growth. Rising foreign investment, soaring GDP rates and an emerging ‘middle class’ were seen as evidence of a new era dawning. But today, much of the continent is again threatened by its familiar enemies of drought and war. By some estimates, over 40 million Africans in a dozen countries are now in need of humanitarian assistance because of food shortages that have expanded from the Horn of Africa to South Sudan and into the farthest corners of southern Africa. The crisis began last year with the El Nino weather pattern. This causes a periodic worldwide shift caused by Pacific Ocean warming, but the latest one has been heightened and intensified by climate change, making it the most extreme in decades. It has brought months of drought to countries across East Africa and Southern Africa, with the effects persisting this year.

In the Horn of Africa, crops are failing and herdsmen are watching their animals die. In Zambia, the drought is causing a major hydro reservoir to dry up, leading to a huge loss of electricity generation, which in turn is resulting in mine shutdowns and layoffs. And in countries such as Zimbabwe and South Africa, the drought is causing poor harvests, triggering steep rises in food prices and forcing governments to import expensive foreign food or to plead for help.

Ethiopia despite its reputation as a country of famine in the early 1980s, rebounded to become one of Africa’s fastest-growing economies in recent years. But now hunger is making a comeback. The most severe drought in a half-century has swept across huge swaths of Ethiopia, and an estimated 10.2 million Ethiopians now need humanitarian aid. One charity, Save the Children, has classified the Ethiopian situation as a “code-red emergency” – as serious as the war in Syria. But despite urgent appeals, only about half of the needed $1.4-billion (U.S.) in food aid has arrived so far.

“The present situation here keeps me awake at night,” said John Graham, country director in Ethiopia for Save the Children. “If these emergency funds do not arrive in time, there is no question that there will be a critical fracture in the food-aid supply pipeline during the main ‘hungry season,’ which peaks in August,” he said in a statement. “The situation here is as grave as I have ever seen it in the 19 years I have spent in Ethiopia and we now only have a tiny fraction of time for the international community to help to stop this. Families should not be put in a position where they need to make heartbreaking decisions about what they use precious water for – to drink and cook with, or to bathe their children and prevent the spread of disease,” Mr. Graham said. http://www.theglobeandmail.com/news/world/devastating-drought-threatens-to-unravel-economic-growth-in-africa/article28762210/

With a population of 95 million, Ethiopia is the second-most populous country in Africa. But about 80 per cent of its population is rural, leaving it highly vulnerable to drought. More than 400,000 children will suffer from severe malnutrition in Ethiopia this year, according to projections, while a further 1.7 million children, pregnant women and young mothers are at risk of falling into severe malnutrition if they don’t get help soon. More than 2.5 million children are likely to drop out of the education system because of the drought. In addition, there are 5.8 million Ethiopians who need urgent access to drinking water. The water shortages have left them vulnerable to disease and illness.

In neighbouring Somalia, an estimated 4.7 million people are in need of humanitarian aid. In some regions, the drought has killed up to 80 per cent of the livestock, and pastoralists are desperately searching for pastures and water for their animals.

In South Sudan, where one of Africa’s most catastrophic wars has been raging for more than two years, at least 40,000 people in one region are already on the brink of starvation. Only the remoteness of their region has prevented an official famine declaration – it is considered too dangerous for aid workers to visit. In total, about a quarter of South Sudan’s 12 million people are facing a hunger crisis and in need of humanitarian aid – primarily because of war, not drought. In some districts, people are surviving by scavenging for fish and water lilies in swamps, but the water will soon dry up as the rainy season ends.

Southern Africa, traditionally less prone to malnutrition than the Horn of Africa, has been severely hit by the latest drought. From Botswana and Namibia to Mozambique and Madagascar, much of the region is suffering the lowest level of rainfall in 35 years. In Mozambique, prices were 50 percent higher than last year.
“Over the coming year, humanitarian partners should prepare themselves for food insecurity levels and food insecure population numbers in southern Africa to be at their highest levels since the 2002-2003 food crisis,” a statement last week by United Nations and European Union researchers said.
Even a country such as South Africa, with one of the continent’s most advanced economies, is suffering badly from the drought. Lack of rainfall has led to declarations of agricultural emergencies in five of the country’s nine provinces, and the government will be forced to import maize. Soaring food prices are pushing thousands of South Africans into poverty. In Lesotho, and Swaziland planting delayed by two months or more has severely impacted maize yields

Malawi
The country is experiencing its first maize deficit in a decade, pushing the price 73 percent higher than the December 2015 average.

Zimbabwe
The drought is particularly bad in southern Africa, including Zimbabwe, where an estimated three million people (about 30 per cent of the population) are in desperate need of food aid. Animals are dying and harvests are failing in the worst drought in a quarter-century. Food production in Zimbabwe had fallen by half compared to last year and maize was 53 percent more expensive. President Robert Mugabe’s government has appealed for $1.5-billion (U.S.) in emergency humanitarian aid, mostly to pay for food imports and to repair irrigation equipment. The government says it will need to import 1.5 million tonnes of maize, the main food staple.

Zambia
The drought has wreaked havoc on Zambia’s economy, not only by hurting its farmers but also by damaging the supply of electricity to its copper mines. Almost all of Zambia’s electricity is generated by hydro power, mainly from the huge Kariba Dam. But the dam’s reservoir has fallen to just 12 per cent of its capacity, forcing Zambia to cut the power supply to its mining companies by 30 per cent. This, in turn, has led to higher costs and layoffs at the mines.


Food prices are soaring in South Africa because of the drought, with the cost of maize rising by about 75 per cent over the past year. The World Bank estimates the drought pushed 50,000 South Africans into poverty last year. The country will need to import 3.8 million tonnes of maize this year, forcing prices even higher. Five of the country’s nine provinces have declared agricultural emergencies and food prices are expected to rise by a further 20 per cent this year. 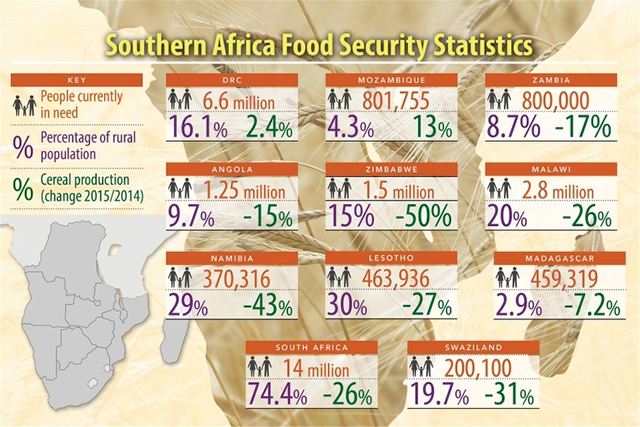 Posted by ajohnstone at 4:46 AM