Kings of the World 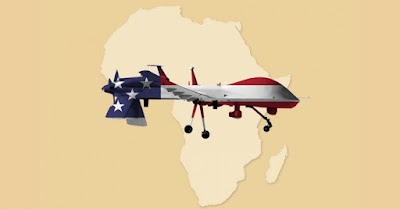 The Intercept website has a story on a secret US base at Garoua in northern Cameroon, near the Nigerian border. Garoua represents the newest expansion of America’s stealth war against Boko Haram jihadists in Africa.

Piloted and unmanned aircraft have flown from bases in Djibouti — the center of U.S. drone operations on the continent — as well as Ethiopia and Kenya, in addition to ships off the coast of East Africa. Predator MQ-1 drones and their larger cousins, MQ-9 Reapers, have been based in Niamey in Niger, N’Djamena in Chad, and Seychelles International Airport. There is plenty more to come. The National Defense Authorization Act for 2016 appropriated $50 million for construction of an “Airfield and Base Camp at Agadez, Niger … to support operations in western Africa.”

A detachment of Gray Eagle MQ-1C drones and their military support team became freed up from other surveillance operations last year, Africom looked for a base in the heart of the combat zone. The U.S. military already had a relationship with the Cameroon military — Special Forces work with Cameroon’s rapid response brigade, known by the French acronym BIR, an elite unit based primarily along the border with Nigeria — and was familiar with Garoua. The newest drone base constitutes a high-cost, high-tech military enterprise plunked down in a poor, under-developed country in Africa. In early February, the base became fully operational, hosting a fleet of four Gray Eagle drones, a successor to the original Predator, manufactured by General Atomics. The four drones, which can carry out surveillance missions in rotation 24 hours a day, allow U.S. intelligence analysts to gather detailed information about Boko Haram’s movements, bomb-making factories, and military camps.

The alliance is with an unsavory African strongman: Cameroonian President Paul Biya, who has clung to power for 33 years, almost as long as Robert Mugabe of Zimbabwe, and is regarded as a corrupt, remote, and authoritarian leader. A Human Rights Foundation report in 2014 stated that “Biya has built a system of corrupt and autocratic power, using the legal and justice system to imprison and bankrupt dissidents, opposition leaders, and journalists. … The secret police prowl university campuses, the army regularly patrols urban centers, and state permission is required for public assembly.” Biya had reportedly amassed a personal fortune of more than $200 million — compared to the average Cameroonian income of $1,350 a year.

The US drones soaring overhead reminds them of Cameroon’s poverty and powerlessness, and heightened their sense of being pawns in a global game. “You Americans are kings of the world, you have no borders,” Djonga said. “All we can do is go along.”

Posted by ajohnstone at 2:59 AM