Sharing out the billions? 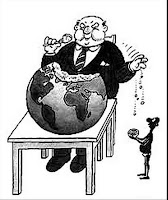 The wealth gap between the world's richest and poorest has continued to widen in recent years. About 15 percent of Africa's population lives on less than $1.00 per day, according to the Brookings researchers .

Researchers at the Brookings Institution suggest that the generosity of just one billionaire would completely restructure the poverty landscape in Swaziland, whose economy is nearly 4,000 times smaller than that of the U.S. More than 40 percent of Swaziland's 1.3 million citizens live below the global poverty line of $1.90 per day, but these people could be hauled over that benchmark by a single individual's act of philanthropy, according to the report.

The Brookings researchers calculated the net worth of the richest billionaire in a handful of emerging and developing economies. In Swaziland's case, that billionaire was international business icon Nathan Kirsh, whose net worth clocks in at about $3.9 billion. If Kirsh pledged to give half of his wealth to the citizens of Swaziland over the course of the next 15 years (not entirely unlike Bill and Melinda Gates' Giving Pledge), extreme poverty would be eradicated from the country. South Africa's richest billionaire would only be able to lower the country's poverty rate from 18 percent to 14 percent, even with a net worth of $7.4 billion.

Findings from the study was that it's much harder to pull African countries out of poverty than it is countries elsewhere, thanks in part to "the depth of poverty in Africa" and the region's relatively high prices for basic necessities.