Kick Christianity and Islam out of Africa 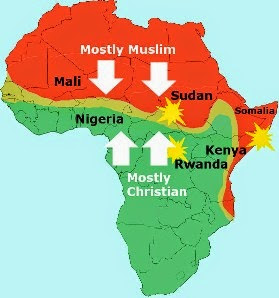 HP: Why do you think it is important to kick Christianity and Islam out of Africa?

Jd Otit (The administrator of World Atheists: Lets Kick Islam and Christianity out of Africa): Africa definitely would be a great place without foreign religion. We might not be able to eradicate the worship of African deities by Africans, however, the worship of African Gods is less problematic than the evils and atrocities associated with these two foreign doctrines Islam and Christianity.
Africa will fare better as one people. Islam and Christianity has divided us; it has torn the fabric of brotherhood that held us together; we see ourselves as Muslims or Christians; we do not recognize what bound us together anymore - our color, our Africaness, our common adversities as a people - we rejoice at the peril of Muslims or Christians because we do not think any more as “African” but rather we label ourselves according to some Middle Eastern idiocy introduced to us through slavery.
My experience of religious Africa is of people who are stupidly passive and numb due to faith and expectations of a greater reward in some paradise. African people have left the fight to “god” - Jewish and Arab Gods are now their escape route, due to fear and cowardice.

HP: Do you think Africa would be more prosperous without religion?

Jd Otit: Africa would prosper greatly without religion. People would not leave situations that require revolutions or human interventions to some invisible sky being, hence manufacturing the slave chains that will hold their next generations in captivity.
Today the people on top are enjoying the disunity and chaos amongst the ordinary people, these are distractions that is working very well for the African elite, “blame the devil, blame yourselves, pray to God , but never blame us, it’s always the devil’s work. “ That is the mantra of the African elite.

HP: Would Africa be less violent without religion?

Jd Otit: Africa would definitely be less violent, there would be less hatred amongst Africans due to different belief system.

HP: We are concerned about over-population in Africa, which has the world’s highest fertility rate.

Jd Otit: Africa is not overpopulated, we have more than enough for our needs, Africa is suffering not because of lack of resources to sustain its people, Africa is suffering due to the greed of the top few, Africa is facing hardship due to mismanagement that is encouraged by western powers. Everyone knows the richness within the African continent; sadly exploitation and encouragement of corruption by the West has impoverished the ordinary African. Overpopulation is not what we should be addressing, but rather corruption and confronting those who are benefiting from the African chaos.

Posted by ajohnstone at 3:32 AM

Email ThisBlogThis!Share to TwitterShare to FacebookShare to Pinterest
Labels: religion

I personally believe that u are a racist, socialist, communist, forefather believer, u are not from GOD the almighty, but from the evil devil, u blacks had nothin stayed in the bush, murdered & rape woman & children, steal rob & maimed other africans, u just do not like the truth of whites brought peace & stability to the region, look today, a black government is in power, its chaos, murders, rape, corruption , theft, hi-jackings, drug & human smuggling, u want me to go on, get u'r facts straight before u write noncense & lies here !

And shall we assume that you represent of Western White civilisation?