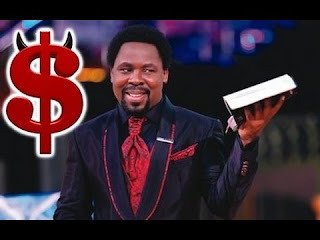 Rows of sick people queue up one afternoon in downtown Lagos. There are people with crutches, mothers with crying babies, a couple of wheelchair-bound people and several with bad coughs. This is not a hospital; it’s a sports center. And they are not waiting to see a doctor; they are here to see a preacher.

T.B. Joshua is one of Nigeria’s most controversial clergymen. Besides claiming to have a direct line to God, this 52-year-old has been performing so-called “healing miracles” for 20 years. He has his own TV shows, two million Facebook fans, sold-out events and branded merchandise. The latest estimates put his wealth at about $150 million. His church has branches all over the world, from the U.K. to Australia. He often goes on what he calls “Miracle Crusades” to other nations.

“He exploits the naïveté or desperation of his followers with no accountability,” says Pradip Thomas, a scholar at the University of Queensland and co-editor of the book Global and Local Televangelism. A dozen people died last year when one of his event venues collapsed. Joshua has not been held legally accountable for the incident…but surely it was another message from God to him?

Joshua is certainly not the only millionaire priest in Nigeria.

The first Pentecostal missions arrived in Nigeria in 1910. By 1970, there were an estimated 300,000 converts, and by the turn of the century, 30 to 40 million, according to Ruth Marshall, professor at the University of Toronto’s Departments for the Study of Religion and Political Science and author of Political Spiritualities: The Pentecostal Revolution in Nigeria. According to the World Christian Database, some 12 percent of Africans are Pentecostals.