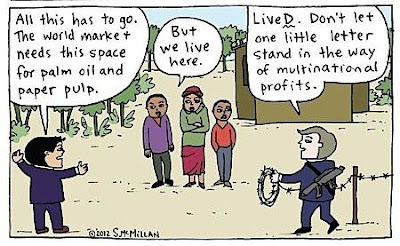 Multinational companies are leasing enormous swaths of land across Africa. Critics have long said such leases amount to a “global land grab,” in which foreign companies and countries profit while local citizens are displaced and lose their way of life. The Economist, however, suggests the real culprits of any African “land grab” are more affluent citizens from large cities who invest in the countryside. Increased demand for food will exacerbate this problem in the coming years.

According to researchers at Lund University in Sweden, foreign companies have already leased about 3 percent of land in Africa, about the same size as the U.S. states of Texas, New Mexico and Oklahoma combined. Most of these leases run for a period of anywhere from 33 to 99 years, and the contracts generally lack any clear rules or limits on local water consumption.

According to the Brookings Institution, approximately 60 percent of the world’s arable land is in sub-Saharan Africa. The continent has become the last frontier for many of the world’s largest companies as they seek new markets for their products – and a base from which to source coveted raw materials such as timber and commodity crops like grains and palm oil. Add the interest in the region by countries such as China and the Gulf states in the Middle East, and Africa risks becoming a focal point of human rights violations as local communities discover they have less access to water — or are even frozen out of lands on which they lived for generations.

Several foreign-owned flower farms were recently attacked in Ethiopia over allegations of human rights violations. And a recent investigation by the United Kingdom daily newspaper Independent suggests the demand for farmed fish is taking food out of the mouths of West Africans in order to produce animal feed for overseas companies.
Posted by ajohnstone at 3:51 AM