The oil curse of Chad 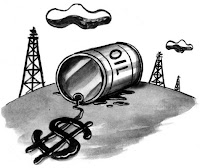 Chad's high court has ordered an oil consortium headed by America’s ExxonMobil to pay $74 billion in fines for alleged unpaid taxes, Bloomberg reports. The court has also demanded the oil giant pay $819 million in overdue royalties. Exxon Mobil has been pumping oil in the African country since 2003, operating a pipeline that delivers Chadian oil to Cameroon for further export.

The record figure is almost five times the country’s GDP of about $13 billion.

Experts say Chad is unlikely to see much of the money.

“Nobody is going to cooperate outside of Chad in enforcing this judgment; this leaves Exxon exposed to possibly losing everything it has inside Chad but that’s such an extraordinary number, I can’t imagine the assets they have there are worth that much,” said Jeffery Atik, who teaches international law at Loyola Law School in Los Angeles.
Posted by ajohnstone at 12:19 PM