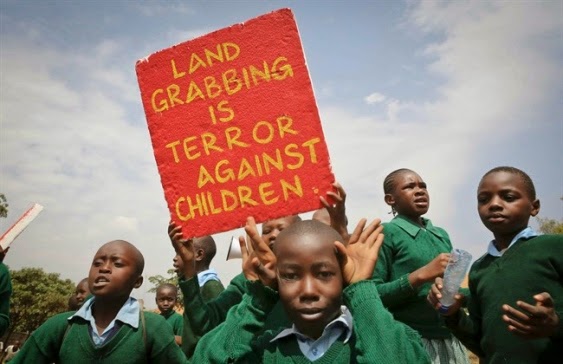 Kenyan police have fired tear gas at school-children in Nairobi who were protesting about the sale of their playground to a private developer. Pupils had returned to the Lang'ata school after a two-week teachers strike to find the play area fenced off to construct a parking lot for a politician’s hotel adjacent to the school.

The school has about 1,000 children between the ages of three and 14 and is run by Nairobi city council. Several children were hurt in the police action to disperse the protest and have been taken to hospital. Around 100 primary school children and a small group of activists pushed over a newly built wall that separated playing fields and the school buildings, close to the capital Nairobi's main domestic airport. The majority of the children were aged between eight and 13. Around 40 armed police accompanied by dogs dispersed the protesters by firing tear gas canisters, an AFP photographer at the scene said. Dozens of children were caught in choking clouds of tear gas before being forced to shelter on a pedestrian bridge over the main road to escape the noxious fumes. Children screamed as police officers in riot gear and waving truncheons pushed them back, some panicking as they sought water to wash their burning eyes.

A senior police officer at the demonstration, Mwangi Kuria, told Kenya's Daily Nation newspaper that officers had been deployed to "safeguard the property." Macharia Njeru, chairman of the Independent Policing Oversight Authority, said the incident would be investigated. "Tear-gassing children is inexcusable,"

The city council has said the playground is public land. It has not commented on the legal status of the apparent sale. Critics have alleged that corrupt elements were behind a deal to turn the land over to the developer. The playground which has been acquired by a private developer said to be a powerful politician, said Boniface Mwangi, a Kenyan human rights activist. “The governor, the senator and other government officials are all scared of the politician, they cannot do anything to stop the playground from the being taken,” Mwangi said.

Nairobi, a city of more than three million people, is rapidly growing and land prices are rising at some of the fastest rates anywhere on the continent, according to real estate experts. Children carried placards protesting against the alleged land grab. "Kenya: the land of shameless grabbers," read one.

“This is brutality beyond words and greed beyond description. It is difficult to believe that police can actually deploy against primary school children and lob tear gas at them to defend a land grabber. This image of a nation determined to steal forcefully from its own children cannot be what we aspire to. It cannot be the legacy we want to bequeath the children,” said opposition leader Raila Odinga.